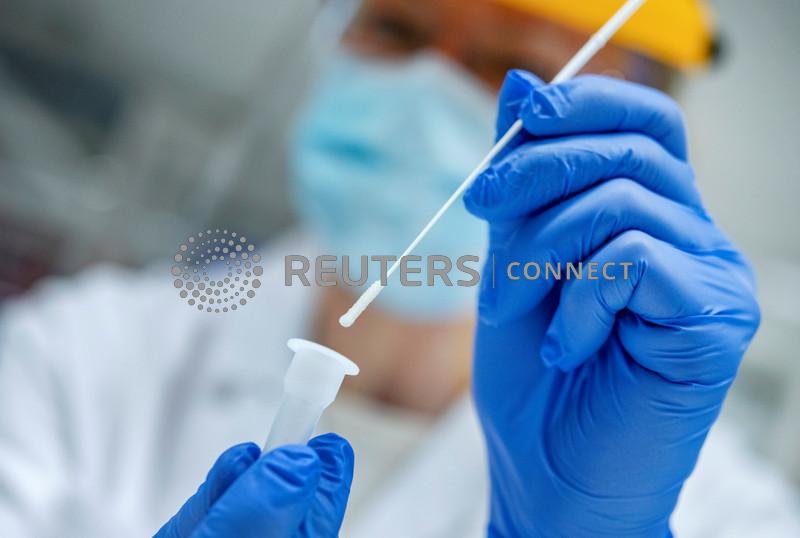 STOCKHOLM (Reuters) – Sweden will loosen COVID-19 quarantine rules and make it easier for employees with key jobs in sectors like healthcare and the police to go to work, the health agency said on Thursday, as the Omicron variant of the virus raged across the country.

People testing positive or who live with someone who has tested positive will have to isolate for 5 days instead of 7 previously, the Public Health Agency said.

A small number of key workers will not have to quarantine at all if they have no symptoms and test negative, despite having been in close contact with a sick person.

“In order to deal with the high rate of infection, that is also expected to increase in the coming period, and in order not to put social functions at risk, we are adjusting the recommendations for testing and for restrictions,” health agency official Sara Byfors told a news conference.

The Swedish Civil Contingencies Agency said that staff shortages could become a real problem and that key workers in areas such as power, heat, water and internet distribution as well as in the emergency services could be exempted from the quarantine rules.

Sweden on Thursday reported a new daily record for COVID-19 infections, registering 39,938 cases on Jan. 19, marginally higher than the previous day. The health agency said a large proportion of the population risked getting the virus in coming weeks.

The real number of cases was likely to be substantially higher as the national test capacity has hit its ceiling.

The health agency asked people who can work from home not to get tested to allow those who need to be at their jobs to continue to work.

According to health agency modelling Sweden could hit a peak of 69,000 daily cases later this month but with the limited test capacity it was unclear if that level had already been passed.

The high number of cases has put a strain on healthcare but the number of patients needing care remained well below the peak of previous waves. On Thursday 110 people needed intensive care because of COVID.