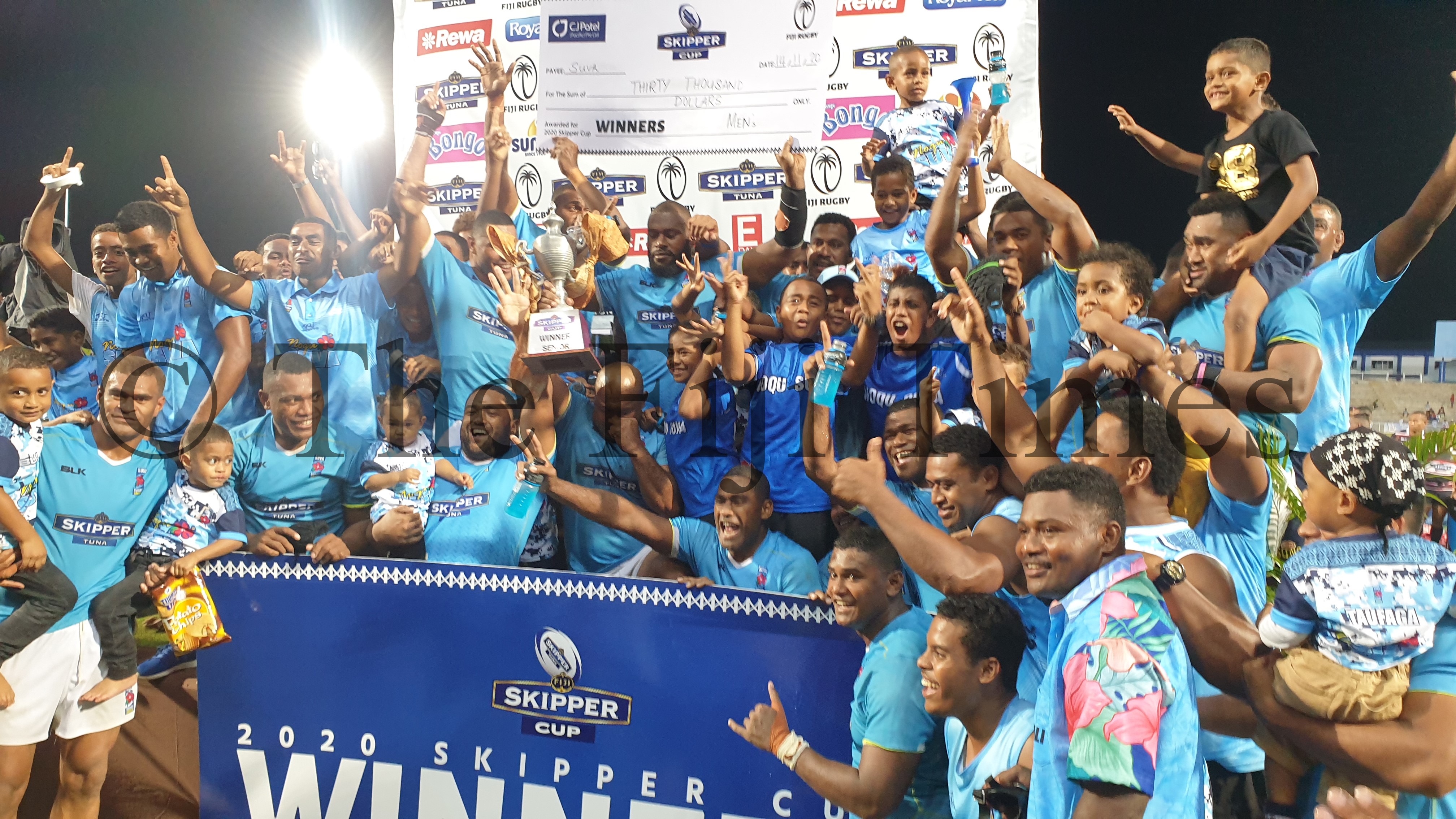 Members of the Ram Sami Suva Rugby team in celebratory mood after their 16-13 victory over Naitasiri in the 2020 Skipper Cup tournament at the ANZ Stadium in Suva. Picture: LUKE NACEI

The John Stewart-captained Suva brigade created history by winning the Skipper Cup for the the third year in a row.

The blue machine rose to the occasion at the ANZ Stadium and delivered when the going got tough and they did what was needed to outclass a fired up Naitasiri outfit who were told by their head coach Dr Ilaitia Tuisese Jr to create their own legacy (FT: 14/11). Dr Tuisese shared this with our journalist Eroni Tuinuku, “Create your own legacy.

From round one, I told the boys we will work together until we reach the last round and here we are. This is your moment to create your own legacy so go out there and do what you do best and that is play rugby.”

Naitasiri came close to shocking the defending champions but I guess the red-card to their warrior and captain Sireli Kaloucava came at a cost. The Sunday Times front page read, ‘Three-peat for the Blues’ as Suva completed a treble in the Skipper Cup.

Suva had prepared well for the fi nal and the blue brigade had the backing of their sponsors –– Ram Sami and Sons, Digicel, Tau Sports and Ali (a businessman from Tuvalu) despite the adversities created by the COVID-19 pandemic. Prior to the fi nal, morale in the Suva camp was high and the boys were reminded of their team motto ‘Humility and hard work’.

Thousands of spectators with a sea of black and blue supporters were on the edge of their seats throughout the game as Suva led 7-6 at the break.

The message in the Suva camp at half-time was simple –– to keep working hard and to maintain the discipline level. The game changed when Naitasiri captain Kaloucava was shown the marching orders, and Suva was awarded a penalty try.

Suva fans rejoiced as Naitasiri fans wondered what went wrong. After the match, the Blues hoisted the Skipper Cup, while Naitasiri learned valuable lessons from the close call. Speaking to Tuinuku an emotional Suva coach Labalaba had this to say, “All the glory goes back to God for leading his journey for us, and we are grateful for his blessings. We formed a family environment in the team to carry us from round one to round 16 and this is what we’ve accomplished.”

Suva dedicated the win to their families who were with them throughout the 16 weeks and the players here and those overseas who have donned the blue outfi t in the previous years. The side also dedicated their win to tireless hooker Sireli Ledua, who featured in all their three Skipper Cup wins and whose son was hospitalised in ICU- the Piku (children’s ward). Ledua has also ended his career in local rugby competition on a high note. Suva captain John Stewart, who lost his six-month old baby in March, dedicated the hard earned win to his little champ who according to John would have watched the game from above. On the other hand, Naitasiri coach Dr Tuisese said, “I thank the Lord for today (Saturday) and hats off to the boys, and we will be back next year and win the title.”

(FT15/11) This is the spirit that I love in Doc, and this spirit and fi ghting character has taken the Highlanders to another level. I wish Doc and his hillmen all the best for 2021 and I congratulate the Capital City boys and their fans — Jo Makaba, Waisale Koroiwasa, Alipate Tuberi, Tom Katonivualiku, Gina Stewart and the shoe-shine boys for the welldeserved win.

The soccer and rugby titles have graced the Capital City and this massive moment in sports must be celebrated. I also congratulate the Nadroga U19 and Lautoka women’s rugby team for winning the U19 and women’s competition respectively. As I conclude, I accord a big vinaka vakalevu to The Fiji Times for all the wonderful articles, stories and colourful pictures from round one right up to the grand finale.

I acknowledge the efforts put in by journalists Waisale Koroiwasa, veteran Maikeli Seru, Eroni Tuinuku, Jo Makaba, Noa Biudole and Zanzeer Singh for the hard yards taken in compiling stories and articles from this year’s Skipper Cup which was a class.

Definitely, The Fiji Times has won hearts for this act! When it comes to sports ––local or international, The Fiji Times takes the edge. It’s a pity that the Fiji v France, Fiji v Italy and Fiji v Scotland battles have been called off but heartbreak for the All Blacks fans as Argentina ended their losing streak against the superpowers of world rugby.

Congratulations Argentina for the win! Some solid lessons for Ian Foster and the All Blacks!

 Rajnesh Ishwar Lingam is a regular contributor to this newspaper and the views expressedin this article are his and not of The Fiji Times.