Suva Swingers – Toast of the town in the colonial era 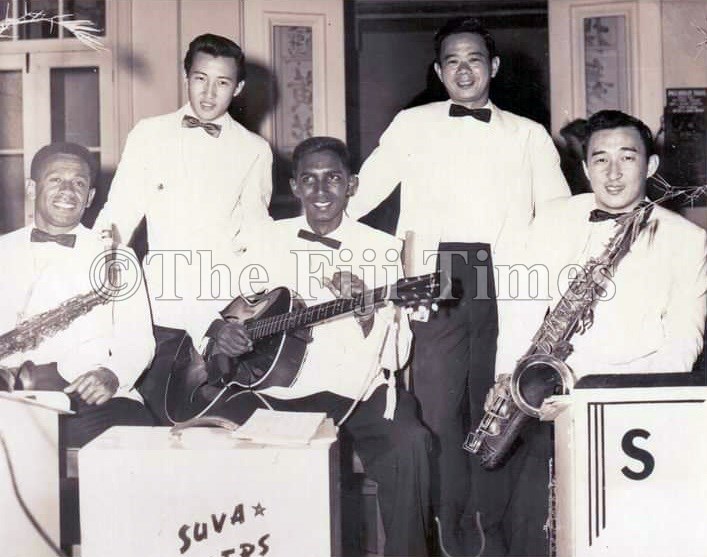 THE name Suva Swingers probably won’t mean much to many Fijians today.

Before the advent of nightclubs in Suva, New Zealand and US Naval and Air Force officers stationed at Laucala Bay towards the end of World War II would gather at one of a handful of places to listen to the smooth sounds of musical ensembles like the Suva Swingers.

Mike Woo, who joined the group in the mid ’50s, said the Suva Swingers reflected the atmosphere in the Capital City at the time.

Suva was going through a transition — from being a major port to the administrative capital of Fiji.

The presence of the US military and New Zealand Air Force and military, combined with colonial administrators who had set up an office in Suva, turned the then-budding urban centre into a sophisticated oasis of the islands.

“It was a very different time in the sense that people dressed up to go out,” shared Mike.

“There was a lot of live music and people always went out to where the bands played.”

Back in the day, the group performed without a drummer or a bass guitarist, with the pianist taking great pains to cover the bass lines and driving the beat for each song.

“My older brother, Noel, was one of the older members of the band and I used to tag along until I earned my stripes and began playing with them.”

Mike was recruited into the Suva Swingers when the ensemble added drums and the double bass for the first time in the mid ’50s.

“Jeffery Houng Lee was on the piano, my brother Noel on saxophone and Simione Rabaka on Alto saxophone, Gus Saffings on bass, Leslie Singh on guitar and I played drums.

“I was the youngest musician in the band, I was only 18 at the time but I loved every minute of it.

“Although we had a core group of musicians, there were times we’d have guest artist come and jam with us, people like Charlie Moore on the banjo or Litia Daveta playing the piano and singing.

“It was an amazing time for music in Fiji because we were playing all the classics, music from the Big Band era like In The Mood (Glenn Miller 1939), Caravan (Duke Ellington 1936), Muskrat Ramble (Kid Ory 1926) and In The Mood For Love (Errol Garner 1945).”

Local bands were playing sophisticated jazz and big band music, influenced by the records brought into the country at the time by New Zealand and US servicemen and women.

Apart from groups like the Suva Swingers, musical groups made up of overseas servicemen also performed around the urban centre — setting a very high platform for local musicians to aspire to.

Local jazz icon Tom Mawi believes the influx of US and New Zealand officers and the standards they performed helped shape the early days of Fiji’s music industry.

“For most of us, it was the first time to hear jazz and big band music being played live,” the 77-year-old guitarist said.

“And we picked up a lot of things from them and developed it into our own sound, that’s why the musicians from that time were very good, because they had a good foundation.

“That’s the advice I want to give young musicians today — learn the jazz standards and it will give you a lot more depth and expand your musical knowledge.”