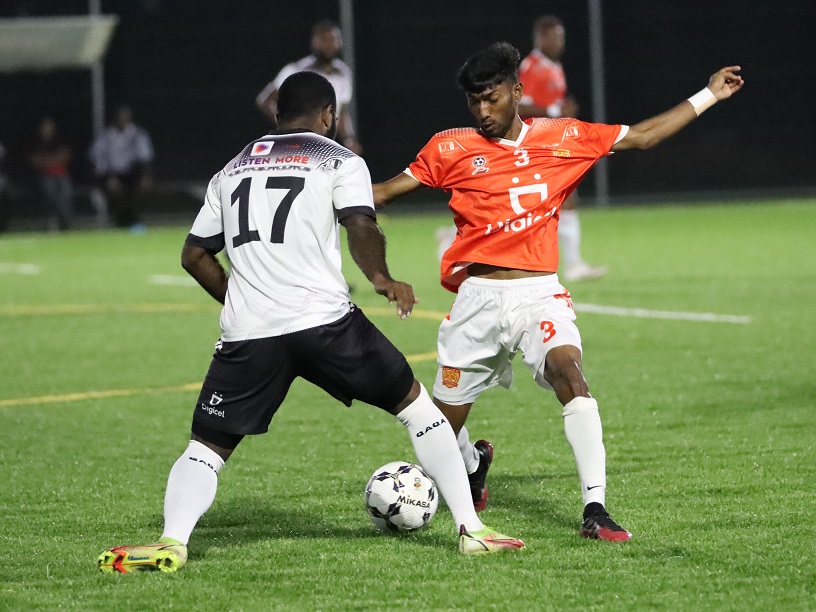 The Suva football side ended Rewa’s unbeaten run in the Digicel Premier League this season with a 2-1 win at the Uprising Sports Complex at Pacific Harbour on Friday night.

Both teams went into the match knowing the DPL title was on the line and displayed beautiful football with some of the greatest goal of the season so far.

t was Khem’s hard work which gave the opportunity to Vanuatu import Azariah Soromon to put Suva in the lead in the 58th minute.

Soromon came in with a powerful drive from 25 yards out to the far bottom left hand corner which went straight into the net.

Rewa applied pressure looking for the equalizer and were rewarded in the 79th minute. Replacement Madhwan Goundar headed in from, Iowane Matanisiga’s corner kick to level the scores.

Just when it looked like the match will end in a draw, Rewa stopper Emori Ragata was sent off in the dying moments for handling the ball just outside his box.

From the resulting free-kick, Soromon came in with a wonder strike, 25 yards out from straight in front, giving replacement goal keeper Mohammed Alam no chance in the 95th minute. Suva football coach Babs Khan was pleased to come out with the important three points.

“I’d like to thank the boys. They have been working hard this week to get this game plan.

“Playing Rewa, if you don’t execute it, they will punch you like they did today on one occasion when he fell off to sleep in defense when the corner came in,” Khan said.

Heading into the final round today, Lautoka, Rewa and Suva are now locked at 32 points each at the top of the table.

In today’s matches, Suva meets Nadroga at the HFC Bank Stadium at 3pm while Rewa hosts Lautoka at Ratu Cakobau Park at the same time.

In other matches, Tailevu-Naitasiri meets Labasa at 1pm at the Uprising Sports Complex ground while Nasinu will host Ba at the HFC Bank Stadium and Navua will host Nadi at 3pm at Prince Charles Park.