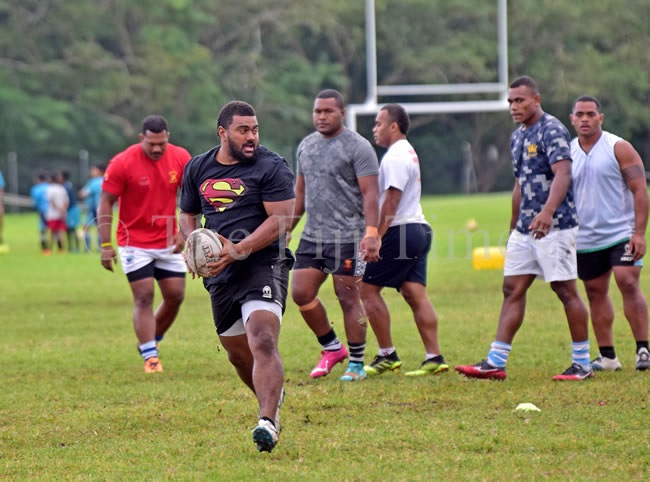 Mesulame Dolokoto going through the drills during the Suva Rugby training at Bidesi Park on Tuesday, July 21, 2020. Picture: JONA KONATACI

Champions Suva had to fight tooth and nail to down a spirited Yasawa side 10-3 in their Skipper Cup clash at the ANZ Stadium in Suva yesterday.

The champions only managed to score two unconverted tries in each half while the Yasawa side’s points came through the boots of national 7s star Napolioni Ratu in the first half.

The heavy Suva pack led by skipper and hooker Isireli Ledua were never given room to dominate the forwards battle as the smaller but gutsy Yasawa forwards fought hard throughout the match.

The Yasawa forwards held their own in the scrums and line-outs but their inexperience of playing in top level rugby let them down on numerous occasions.

Suva was reduced to 14 men early in the first half when lanky lock Tuifagalele Sorovakatini was sent to the sin-bin by referee Tevita Rokovereni for a dangerous tackle on Ratu.

The heavy underfoot conditions at the ANZ Stadium didn’t allow the Suva back line to dictate play like they did against Nadroga the previous week.

Suva first-five Jone Manu tried hard throughout the match to find a way through the Yasawa defence but never allowed a chance by the drifting defence applied by the visitors. Suva’s second try was scored when their forwards attacked the Yasawa try line and managed to suck in the defence which allowed wing Keponi Paul to dive over in the corner

. Ratu said they were disappointed with the loss but they had to give credit to the Suva team.

“We just need to iron out some areas we felt let us down today (yesterday) and we also had to improve in our discipline,” he said.