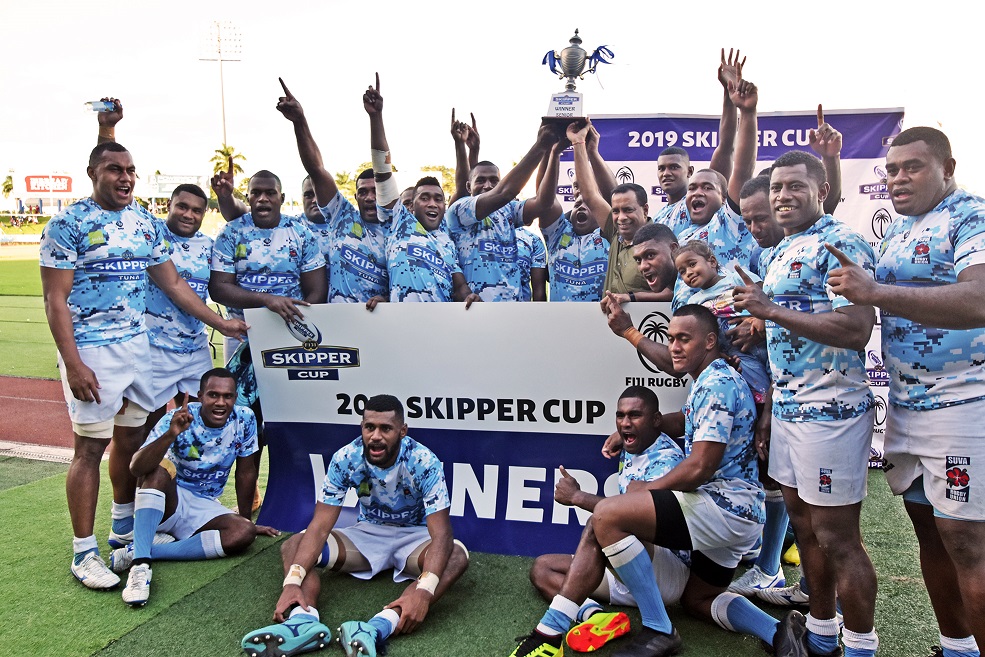 The Skipper Cup champions Suva with their throphy after beating Nadroga in the final at ANZ Stadium yesterday. Picture: RAMA

A courageous effort by defending Skipper Cup champion Qaqa Suva, who were missing 11 key players tied down with Fijian Latui commitment saw them defeat an experienced Nadroga side 34-26 in the 2019 grand final at the ANZ Stadium in Suva yesterday.

From the first whistle the Capital City side showed they meant business and just after a few minutes of continuous effort, hardworking number eight Jiuta Takubu managed to burst through the last list line of Nadroga defence to score the first try of the match.

Raoba added another three points from the penalty spot to increase their lead to 10-0.

Nadroga blindside flanker Eremasi Radrodro slotting in at number eight broke away from a scrum close to the Suva try line to score the first try for his side and the successful conversion from fullback Amenoni Nasilasila to leave Nadroga trailing closely behind at 10-7.

A defensive lineout throw won by Nadroga and was quickly spread out by the Nadroga backline was finished off by Lepani Kurumudu scoring the second try for Nadroga and pushing them in front to 12-10 after Nasilasila was unsuccessful with the conversion.

Another fast attacking move by the Nadroga backs saw centre Nacanieli Narekuva diving over for Nadroga’s third try which Nasilasila converted to take them further ahead to 19-10.

Nadroga was reduced to 14-men after number eight Aca Simolo was shown the yellow card for a high tackle.

In another attacking raid by the Suva forwards inside the Nadroga half, lanky Sorovakatini Tuifagalele, who was playing at lock for the hosts managed to reach out and score Suva’s second try which Raoba again converted to put Suva in the lead 20-19 at half time.

Nadroga came out from the dressing room after half time fired up and Radrodro showed his class by bulldozing his way through the Suva defence to score his team’s fourth try which was converted by Nasilasila to again see Nadroga taking the lead 26-20.

After throwing their bodies on the line for a couple of minutes as the Nadroga attacks increased, Suva managed to score another try to Raoba and the successful conversion saw Suva taking over the lead again 27-26.

Sensing they could be heading for back to back victories in the Skipper Cup competition the Suva players lifted their game to another level in the final five minutes working together in defence to disrupt all Nadroga’s attempts to reach the try line.

Lanky Suva lock Tuifagalele scored his second try following some hard work from his pack and the try was converted by Raoba to see Suva in front 34-26 when referee Tevita Rokovereni blew the final whistle.

“Hats off to the Nadroga side for a wonderful performance and that is what they were here for. They are a very good team and they have been real champions for Fiji Rugby for the past 15 to 20 years,” Fuli said.

“I believe that if you want to beat Nadro you will have to do your best and give your double best, otherwise you fall short and that is what the Suva boys did today.

“Congratulations to both the teams for displaying quality rugby and that was what the fans were here for, it was our intension to defend the Skipper Cup and that is what we have done,” he added.