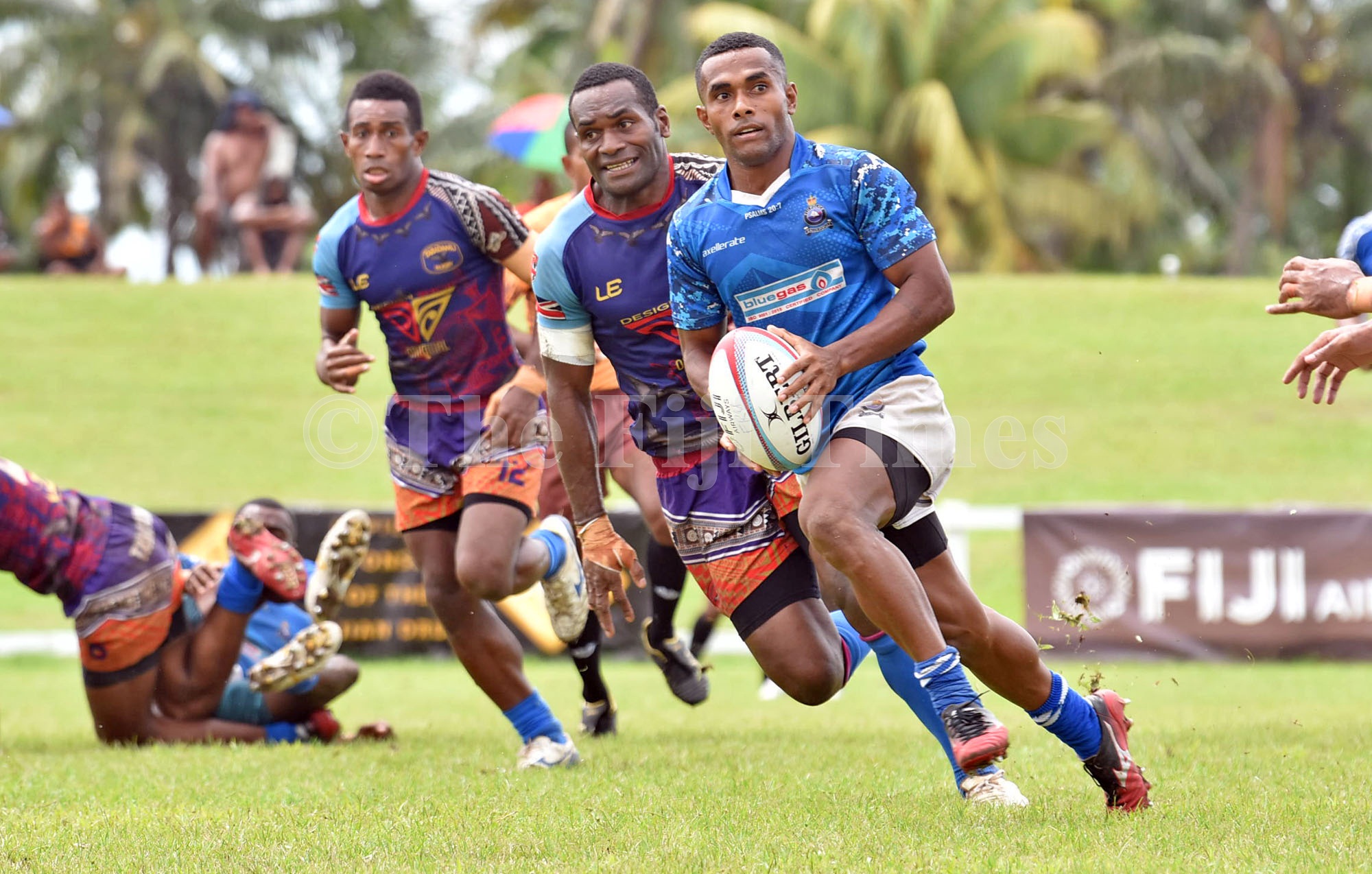 Terio Tamani of Police Blue on attack against Tabadamu in the Cup quarter final match of the Super Sevens Series competition at Lawaqa Park in Sigatoka . Picture; JONACANI LALAKOBAU

The fourth and final leg of the 2021 Fiji Rugby Union Super Sevens Series will set a platform for the national 7s team ahead of
the 2021-2022 World Rugby Series opening leg in Dubai and South Africa in December.

FRU chief executive officer John O’Connor said players who were part of the Fiji men’s extended squad would feature for
their own clubs during the final leg of the 2021 FRU Super Sevens Series.

“This leg will set the platform and assist our men’s and women’s teams and coaches preparing for the 2021-2022 series opening leg,” he said.

Interim men’s coach Saiasi Fuli, who is also the Fijiana 7s coach, said its massively important to have this final leg of the
Super Sevens Series to ensure they were on the right track ahead of the Dubai 7s.

“With the extended squad players participating in this tournament, we will be able to gauge their fitness capacity, build the
right combinations, provide the basis of selection and above all get the much-needed game time,” Fuli said.

“The Super Sevens Series on November 12- 13 at ANZ Stadium in Suva has served its purpose at the start of the year which gave
our players the much needed game time in preparation leading to the Oceania 7s and the Olympics,” he said.

O’Connor said no other union was able to replicate such series and believed it was the cornerstone of the players’ winning performance at the Oceania 7s and the Olympic Games.

“We are so fortunate that in Fiji we were able to host our own series.

“The Super 7s Series has generated its own interest with local 7s teams, players and fans therefore it was important for us to complete the last leg of the first Super Sevens Series and acknowledge the teams and our partners who have assisted in making the series happen.

“We also intend to continue the momentum into the new series next year. All the core teams which were part of the past three legs have been included.

“The 16 men’s teams have been divided into four pools and the top four finishers during the third leg in Savusavu take charge of each pool.

The 12 women’s teams have been divided into four pools.

The competition schedule will be confirmed in due course.

He also added that all pool games will be played on Friday with the knockouts to take place on Saturday.

“The FRU has been working closely with participating teams with regards to the ‘terms of Participation’ and the ‘rules and
regulations’, to ensure that the tournament is run smoothly and is compliant with Fiji’s ‘Safe Return to Training and to play’ protocols.”

He added that only fully vaccinated players and team officials will be allowed to play.

“All the participating clubs are to submit their vaccinations details, head shots and the names of
the team members by November 8 to Fiji Rugby’s national operations manager Sale Sorovaki.”

The winner of the men’s and women’s category in the 4th leg will each be presented with the trophy.

The men’s series champion will be awarded the inaugural Super 7s Series trophy and $20,000, the second-placed team will get $10,000 while the third-placed team receives $5000.