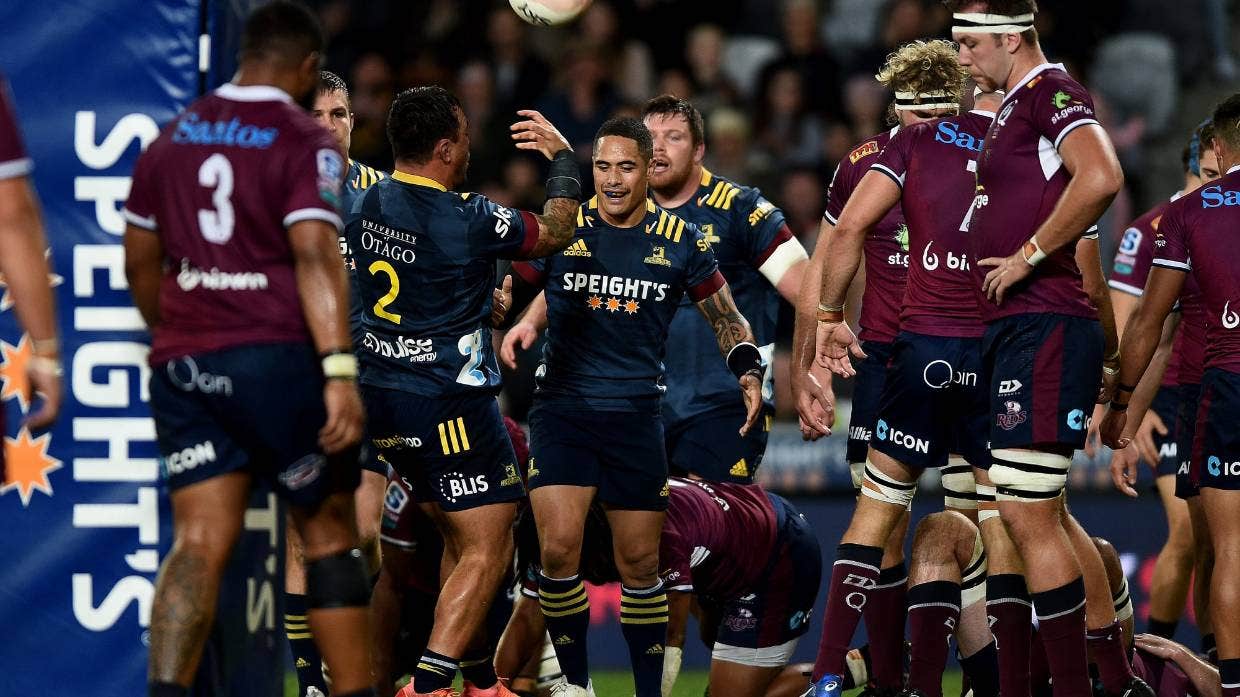 Ash Dixon (No 2) celebrates scoring his first-half try against the Reds at Forsyth Barr Stadium on Friday. Picture: STUFF SPORTS.

The Highlanders have reminded Australian rugby that Super Rugby Trans-Tasman will be a different and potentially much more painful ball game with a six-try, 40-19 win against the Reds in Dunedin.

In the Highlanders’ first game with Clarke Dermody in charge and head coach Tony Brown in Japan, the Highlanders’ forward pack stepped up against the Australians, dominating at the lineout and gaining a crucial edge at scrum time in the first half.

Indeed, on a cold evening in Dunedin, it looked like the Reds’ celebrations after winning Super Rugby AU last weekend had caught up with them in the first 40 minutes, with star No 10 James O’Connor quiet in the opening spell and replaced at halftime after picking up a head knock.

The Highlanders led 21-7 after three first half-tries as their strong set-piece was supported by a vastly superior kicking game, much of it from the boot of No 10 Mitch Hunt.

The Reds came out in the second half breathing fire, and former NRL star Suliasi Vunivalu scored a brilliant try after 45 minutes after a crossfield kick from Bryce Hegarty.

However, hooker Ash Dixon’s second try of the evening after 49 minutes restored the Highlanders’ 14-point cushion and they were never in danger from there, with Dixon’s replacement Liam Coltman also grabbing a five-pointer from a lineout drive.

In front of 10, 862 fans in Dunedin – about 3,000 fewer than the Highlanders’ Super Rugby Aotearoa crowds – Jona Nareki was a livewire on the left wing, Dixon and Hugh Renton were everywhere and Scott Gregory continued his development in the No 12 jersey with another physical outing.

Gregory has not looked back since being handed a midfield berth and again impressed with his carries and leg drive. The young Northlander is a big man and with his error rate low showed why the Highlanders think so highly of him.

In-form flanker Billy Harmon was another to catch the eye, as the Highlanders competed strongly at the breakdown, where the Reds have been so strong in the Australian competition.

Gregory scored inside the first minute after a mistake by rookie Reds halfback Kalani Thomas.

The 19-year-old fired a pass into big lock Angus Blyth and the Highlanders pounced on the ball inside the the Reds’ 22m. From there, they set up Gregory after some nice hands by new fullback Sam Gilbert.

However, Thomas partially redeemed himself just minutes late, diving over from close to the line after some muscular work by the Reds forwards.