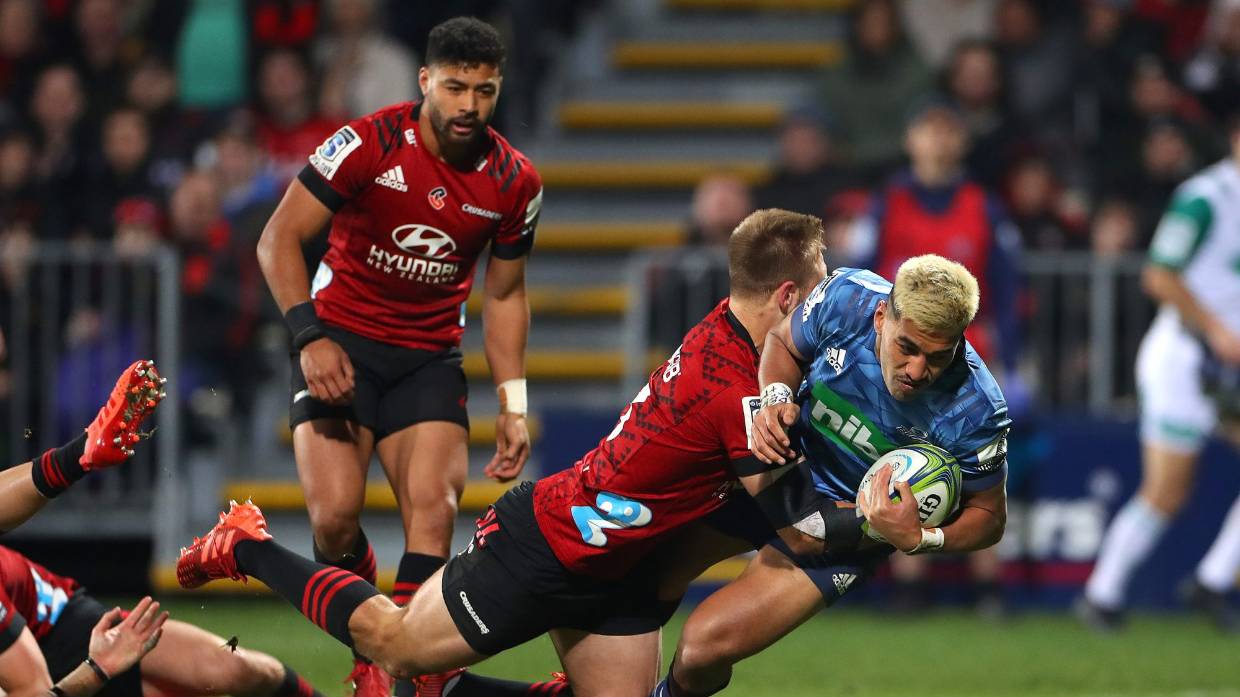 Rieko Ioane of the Blues barges his way over to score. Picture: STUFF SPORTS

They came, they saw, but they could not conquer.

The Crusaders remain the benchmark, having beaten the Blues 26-15 on a frigid Christchurch Saturday night.

Make no mistake, it took a heck of an effort to rebuff the Blues’ challenge, and there is every chance Super Rugby Aotearoa will yet be decided in the return fixture next month.

But for now, the Crusaders hold a six point lead over their rivals as they head into their bye week at the halfway mark for both teams.

Form outside back Will Jordan, having not long returned from a head injury assessment, iced the win in the 75th minute, when he ran in the home side’s second try on the back of a sustained spell inside the Blues’ 22.

And so the red and blacks march on, beating the Blues a 12th time on the bounce and extending their unbeaten home run to a whopping 36 matches.

To think Blues fans were daring to believe after 54 minutes, and who could blame them?

After all, centre Rieko Ioane crashed over to give his side a 15-9 lead. Even when Crusaders centre Braydon Ennor charged down Otere Black’s simple conversion attempt, they had all the momentum

However, the Crusaders haven’t won Super Rugby the past three years for nothing.

Richie Mo’unga, having caught the Blues napping from the restart moments earlier, put wing George Bridge away down the left-hand flank, before the wing put halfback Mitch Drummond over for the home side’s first try.

Up 16-15 with 18 minutes to play, the Crusaders, as they so often do, simply turned the screw and finished over the top of their opponents.

Mo’unga slotted a penalty goal, before Jordan finished the Aucklanders off.

Those who expected a high-octane classic were out of luck, but that’s not to say it wasn’t a gripping fixture.

The match had a test match-like intensity to it at times, with heavy contact and ferocious defence an overwhelming ingredient.

The Blues’ desperation on their own goal line in the opening quarter said it all when it comes to their resurgence.

Not only did they rebuff Jack Goodhue, they somehow also knocked back Codie Taylor and Joe Moody, before earning a well-earned penalty.

The Crusaders were far from themselves in the opening 20 minutes, a scratchy opening quarter which made the Blues look right at home.

Pivot Mo’unga twice missed touch from penalties, including once deep inside the Blues’ half, while midfielder Goodhue also hoofed a ball out to cost his side territory.

That was scored by flashy Blues wing Mark Telea, who finished superbly inside the right-hand corner flag after taking a cut-out ball from Black.

It ensured the Blues didn’t come away empty-handed after No 8 Hoskins Sotutu was held up early doors, having powered off the back of the scrum and crossed the line, only for Ennor to have got a mitt under it.

Down 7-0, the Crusaders, on the back of a couple fantastic George Bridge takes under the high ball, started to awaken.

However, points were difficult to come by, even when they spent patches of possession setup inside the Blues’ 22.

A lack of discipline cost the Blues six points in the form of a pair of Richie Mo’unga penalties, but the sight of them wasting no time kicking the ball into touch made it evident they were beyond content with a one-point lead at the break.