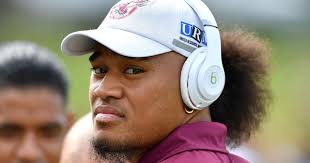 SYDNEY, 03 JUNE 2020 (NRL) – Rising Manly star Moses Suli is poised to recommit to the maroon and white, knocking back a lucrative Dragons offer worth around $2 million in another blow to the joint-venture’s recruitment plans.

NRL.com understands Suli has told Manly he will remain at the club until the end of 2022 on an upgraded two-year extension, worth roughly $550,000 a season.

Neither the Dragons or Sea Eagles have made official comment on Suli’s future, but it is understood the Manly deal is in the process of being finalised.

His re-commitment represents a serious financial sacrifice in the short-term, with the Sea Eagles’ deal worth around $125,000 less a season than the Dragons three-year offer.

St George Illawarra pursued Suli hard before the COVID-19 shutdown with a deal that would have made him one of the highest-paid centres in the NRL.

But as reported by NRL.com earlier on Tuesday, mounting dramas around the Dragons and uncertainty over Paul McGregor’s future played a significant part in Suli’s decision.

With Suli beginning to show signs of fulfilling his lofty potential, the 21-year-old knocked back an initial four-year Manly extension, backing himself to stay at the club on a shorter contract and cash in on his next deal in two years time.

Suli has thrived under Des Hasler’s coaching after being offered an NRL lifeline by predecessor Trent Barrett, who signed him on a cut-price train-and-trial contract in 2018.

Hasler has helped keep Suli’s playing weight on track and as a result he bagged six tries from 22 impressive games last year.

Having already bounced through Wests Tigers and Canterbury, the security of Hasler’s tutelage and bond with several Manly teammates loomed large in the Sea Eagles retention bid.

At the same time the Dragons’ ongoing dramas haven’t helped their cause.

Mounting pressure on McGregor and Saturday’s listless loss to the Warriors, the club’s 13th from their past 15 games, make for a difficult recruitment sell.

The Dragons have centres Euan Aitken and Tim Lafai both coming off-contract in 2020 and unlikely to be retained with neither able to crack a starting spot.

A strike outside back has been high on the Dragons wish list for some time, with Suli and Storm flyer Josh Addo-Carr among the club’s targets.

Tyson Frizell’s move to Newcastle next season also has the Red V hunting a back-row replacement after the NSW Origin and Test star said a team’s premiership chances would dictate where he plays beyond 2020.