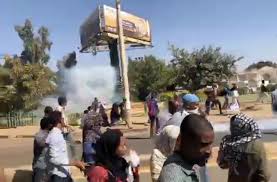 People participate in an anti-government protest in Omdurman, Sudan January 9, 2018 in this still image taken from a social media video. Haitham Seo/via REUTERS

Amnesty International meanwhile accused security forces in the city of pursuing injured demonstrators inside a hospital after protests on Wednesday in which three people were killed. Some people injured in the protests had been taken to the hospital for treatment.

The demonstrations are the most serious challenge yet to President Omar al-Bashir, a former army general who overthrew an elected government in 1989 but has since won elections that his opponents say were neither fair nor free.

Wednesday’s deaths raised to at least 22 the number of people killed in Sudan since protests began on Dec. 19, including two security personnel, according to official figures. Hundreds have also been injured and hundreds more have been arrested.

In Omdurman on Thursday, demonstrators blocked the city’s 40th Street before security forces attacked them with tear gas, forcing many to disperse into side roads. There were no immediate reports of any casualties.

The African nation has been rocked by weeks of almost daily anti-government protests sparked by rising food prices and cash shortages amid a deepening financial crisis. The protests have since turned against Bashir’s nearly 30 years in office.

State news agency SUNA said police on Wednesday had used tear gas to disperse “illegal” protests in Omdurman. It cited police as saying they knew of three deaths and several people being wounded and that these attacks were being investigated.

Amnesty said that in Omdurman on Wednesday security forces had opened fire on demonstrators and three people were killed. Eight people were hospitalized suffering from gunshot wounds to the head, chest, stomach and legs, Amnesty added.

“The security officers opened fire in the hospital court yard and then marched into the emergency and medical sections of the Omdurman Hospital roughing up both patients and doctors,” an Amnesty statement said. “There must be an urgent investigation into this horrific attack, and all officers involved must be held accountable.”

Sudanese officials were not immediately available for a comment on the report. But a spokesman for Bashir’s ruling party said that the Khartoum governor has set up a “fact-finding committee to investigate what happened at Omdurman Hospital on Wednesday night, January 9”.

Sudan’s economy was crippled when the south seceded, taking away much of the country’s oil resources. The crisis has deepened since last year, when the country saw some brief protests over bread shortages.

The United States lifted 20-year-old trade sanctions on Sudan in October 2017. But many investors have continued to shun a country still listed by Washington as a state sponsor of terrorism.