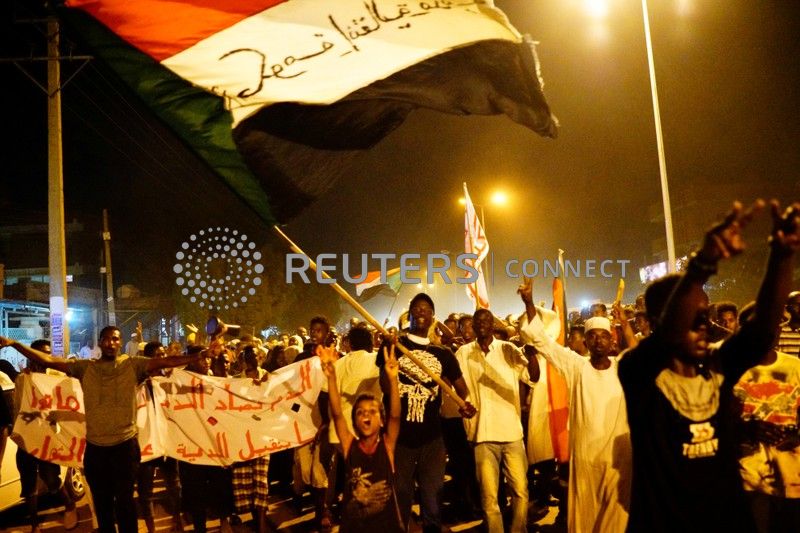 KHARTOUM (Reuters) – Sudanese security forces raided the head office of a leading opposition group on Saturday, a day before a huge protest march was planned to demand a transition to civilian rule, witnesses and a spokesman for the group said.

Sudan’s ruling military council and the opposition movement have been wrangling for weeks over how to manage a transition to elections since the military ousted long-time president Omar al-Bashir on April 11.

Security forces raided the Sudanese Professionals’ Association (SPA) office, where the group had been due to hold a news conference.

“This represents a violation of liberties that is even worse than the regime of the former president (Bashir),” Ahmed al-Rabie, an SPA spokesman, told Reuters. “This is a bad sign for the atmosphere of mediation between the two parties.”

The military council did not immediately comment. The SPA made no mention of arrests.

The news conference was planned ahead of a march called on Sunday by an opposition coalition, the Forces of Freedom and Change (FFC), that the SPA is a part of. The opposition are hoping as many as a million people will join the march, which they want to use to press the military council to hand power over to civilians.

Earlier on Saturday, the military council said FFC would bear the responsibility for any loss of life or damage resulting from the planned march.

“We … hold the Forces for Freedom and Change fully responsible for any spirit that is lost in this march, or any damage or harm to citizens or state institutions,” the council said in a statement carried by state news agency SUNA.

The deputy head of the Transitional Military Council (TMC), General Mohamed Hamdan Dagalo, warned of “vandals” and a “concealed agenda” that he suggested might seek to take advantage of the march.

Direct talks between the council and the FFC stalled and then collapsed altogether when security forces stormed a protest sit-in in central Khartoum on June 3, killing dozens.

The sit-in had become the focal point of protests against Bashir and the military council.

Mediators led by the African Union (AU) and Ethiopian Prime Minister Abiy Ahmed have since been trying to broker a return to direct talks between the two sides.

On Friday, the military council said a proposal submitted by the AU and Ethiopia received on June 27 was suitable for the resumption of talks with the opposition.

The opposition had supported an earlier Ethiopian proposal before the military council said the AU and Ethiopian efforts needed to be merged.

Separately on Saturday, the SPA said the head of a teachers’ committee and a leading member of the FFC had been detained.

“We urge the international community to demand their immediate release. This move by the TMC is highly detrimental to confidence building at this crucial time,” said the SPA, which is part of the FFC and spearheaded the anti-Bashir protests.

The European Union on Friday said the Sudanese people’s right to protest and express their views “is key” and supported the AU-Ethiopian mediation efforts.