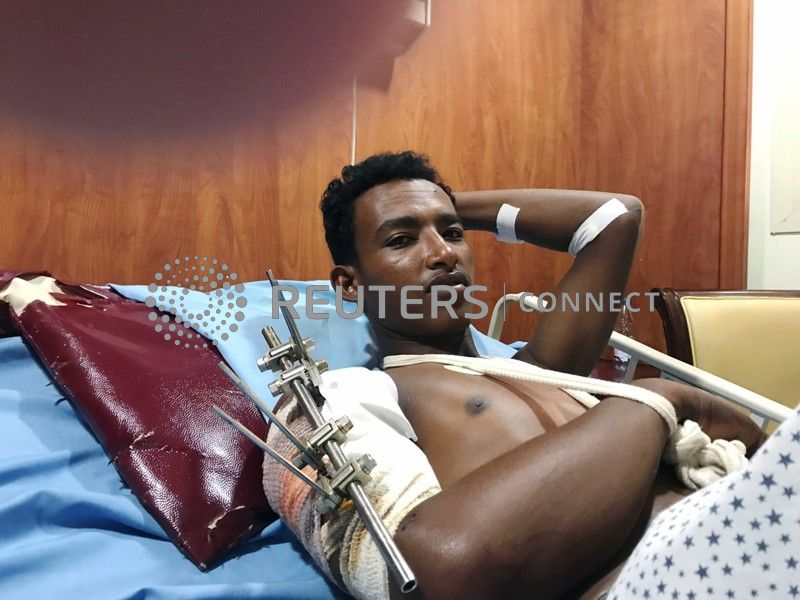 A victim of a gunshot wound sustained in the crackdown on Sudanese protesters is seen inside a ward receiving treatment in a hospital in Khartoum, Sudan June 7, 2019. REUTERS/Michael Georgy

KHARTOUM (Reuters) – After the victims of a deadly crackdown on a protest camp started pouring into a Khartoum hospital, many previous patients there begged to leave in terror, overwhelming doctors.

Some of the militiamen who raided the pro-democracy sit-in had surrounded Royal Care hospital to hunt protesters taking refuge in the building, said its deputy director, Dr. Mohammed Abdel Rahman.

“People were crying and screaming,” he told Reuters. “They were desperate to leave … while we were trying to cope with hundreds in serious condition who were arriving.”

The opposition says 113 people were killed in the storming of the civilian sit-in on Monday and a subsequent wider crackdown. The government put the death toll at 61 people, including three security personnel.

Shortly after the violence erupted, the hospital declared code black, meaning the 100-bed facility was operating at full capacity. But doctors had no choice.

Three hundred people who were either hit by bullets, beaten with batons, or whipped with long wooden sticks, were in dire need of treatment. Five days later, the hospital still cannot cope.

Exhausted doctors and other staff have no relief – working around the clock because other colleagues cannot make it to Sudan’s biggest private hospital.

There are only 20 physicians. Aside from treating patients, they have taken over nursing and administrative duties and even cleaning floors because there is no one else to do the job.

“I felt bad staying at home but there was nothing I could do,” said senior administrator Ramah Rahma. “Either the roads were blocked or I had to go back home because of gunfire.”

Six people died from gunshot wounds, two of them before arriving. But the majority are suffering from bone fractures and whippings which leave long scars along their backs.

“They were struck with batons mostly in the upper arms and shoulders and lower legs, mostly ankles,” said Abdel Rahman.

He said stress levels peaked after the Rapid Support Forces (RSF), which stand accused of genocide in the war against rebels in Darfur, arrived by the hundreds in pick up trucks and formed a cordon around the hospital to search for protesters.

The Transitional Military Council (TMC) has said the force has a strong track record of fighting terrorism and a fabricated social media campaign was aimed at smearing them.

On Friday, there were no RSF forces within site of the hospital. Some were relaxing and sipping cups of tea along roads outside the Defence Ministry where protesters had gathered by the hundreds of thousands to demand democracy.

A few of them, who once punched their fists in the air to call for radical change, were collecting garbage left along the former protest camp site where people from all walks of life had gathered – women, teenagers, doctors, accountants, vendors.

On Friday, there was barely any movement in the hospital. A few nurses quietly stood at their stations. The emergency room was empty. No one was attending labs.

During the height of the crisis, when patients needed medicine and other supplies, the hospital’s one functioning ambulance was the only vehicle available – because doctors feared others would be targeted.

“I have never experienced anything like this. I used to work in a military hospital. It was simple,” said Abdel Rahman.

“You treat a soldier and he would say I am going home. Here it was one patient wanting to tell you their story but you have to move on to another one beside you.”

On one hospital ward, victims lay in bed, with metal rods holding together legs and arms shattered by bullets.

Some had spent their time at the sit-in area listening to opposition leaders speak, or studying the photographs of army officers executed on orders of Bashir. They had high hopes of a brighter future, until the bullets started flying on Monday.

Another patient, Mohammed Abdel Baqi, said he was not interested in politics and was not taking part in the sit-in. He was at a market shopping for clothes to celebrate the Eid al-Fitr religious holiday that marks the end of the holy month of Ramadan.

“Security forces just showed up and started firing,” said the 22-year-old trader, who said he had planned to move to Saudi Arabia to seek a better life, a decision that had nothing to do with politics.

Some are hopeful for Sudan’s future, despite the high price they are paying for pushing for civilian rule.

Down the hall, a university student said he hoped security forces should stand by the Sudanese people. He struggled to slowly make the victory sign, his hand passing close to a large metal rod attached to his leg.