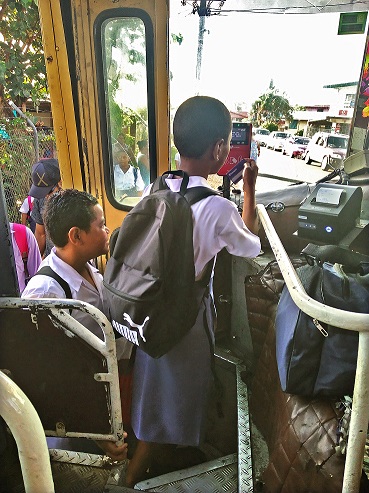 PARENTS crowded outside the Education Ministry headquarters in Suva yesterday to top up their children’s subsidised eTransport school bus cards.

A few parents said the ministry must work to communicate well with parents during this period.

Alisi Rogoyawa said she was not able to use the e-ticketing kiosks in town to top up her children’s bus cards.

Ms Rogoyawa said she travelled from Nausori to Marela House in Suva to top up the cards.

Selai Tiko echoed similar sentiments and said the ministry must be clear when they issued announcements to students and parents.

She said the lack of clarity created a lot of confusion and frustration as parents tried to get their children ready for school.

Ms Tiko said she could not use the e-ticketing kiosks in Suva because it was not available.

Students and parents are now eligible to have their cards topped up.

The ministry had earlier stated that the eTransport cards for students could be topped up at the new e-ticketing kiosks in Suva, Nausori and Nadi.

It had also urged parents to have their children’s bus cards redeemed before school commences next Monday.

The first term of school this year begins on January 13.