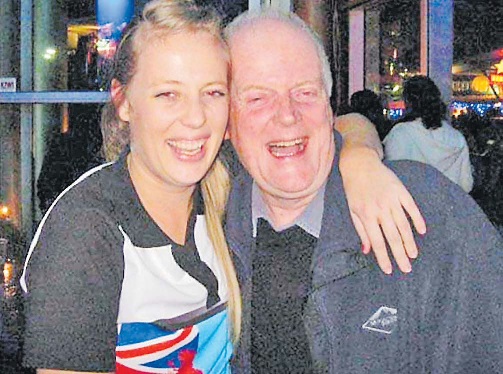 Stuart Huggett loved architecture and design, but most of all he loved people. With his love for making a change and doing good, Mr Huggett used his company, Architects Pacific, as a vessel to try and do exactly that.

His daughter, Amitia Huggett, who is the managing director of the company, said each job and each client were precious to him and the reputation of the company was built on this level of care and integrity and still runs true today.

Mr Huggett or Stu as he was fondly known to all who knew him, passed away last week, leaving behind his family and his legacy in the architecture and design industry.

“Stu, Gilly and my two sisters moved to Fiji in 1969. Stu started off here as the resident architect at the University of the South Pacific. Mum and dad founded Architects Pacific in Suva in 1971 and never looked back. My brother and I were born here in Suva in the 1980s. Stuart is survived by four brothers in the UK and a sister in Melbourne,” said Ms Huggett.

“Stu and Gilly worked in Nigeria for the UK government in the mid 1960s when civil war broke out. This was near the time that they decided that they needed to settle in Fiji. “Stu took a posting at the University of the South Pacific as their resident architect in 1969. Mum and dad were struggling financially when they came from the UK, he described the scene as ‘living off milk crates’.

“They arrived in Fiji with three suitcases and a rundown short wheel based Defender and two children under the age of three.” According to Ms Huggett he loved a good single malt Whiskey and never shied away from a bowl of kava.

“Ironing clothes was one of his many joys – it said it made him calm.” She shared some of his likes and dislikes with the fi rst and foremost being his hate for anything Microsoft – he was an Apple man through and through.

Not very good at being alone, Mr Huggett used to make sure that he was always surrounded by people or at least had someone to go to the supermarket with. His most favourite thing in the world was blasting Handel or Bach early morning in the office while staff arrived — he would then proceed to give them all a music and history lesson. He loved to be on a plane. Yes, he loved travelling, but being on a plane was his happy place, his three passions other than architecture were history, astronomy and politics. “Stu had started his retirement plan at least five years ago.

I have been director and more recently managing director for Architects Pacific for the last seven years. “Dad nurtured the administrative and design side in me and I grew in both areas under his guidance for the last 15 years at the fi rm. I couldn’t have asked for a better dad, teacher and mentor to ready me for what I am doing.”

Ms Huggett said Architects Pacific was Mr Huggett’s baby, adding that he was so passionate about Architects Pacific  and the profession in general. “His legacy is Architects Pacific and that is why I am here as managing director to make sure his legacy lives on. “Another of his legacies are his children. This is not just his biological, but also all the staff, those current and those historical, they have always been so important to Stu who was always the first to try and teach the juniors as much as he could to make sure they rose. “He was dedicated to us all, the same way he was dedicated to Fiji. He was dedicated to our country, our industry and dedicated to making sure his knowledge was taught to those junior to him. And this knowledge was not always confined to architectural.

“Stuart was hardworking and always the first in the office in the mornings and the last to leave in the evenings. He was trusting and trustworthy. He had an incredible gift to make sure everyone was able to have a good time and a good laugh (usually at his expense). “He loved his work and it was his hobby, he treated every moment with a lighthearted and fun nature that really made all of us look forward to coming to work. “A great man, intelligent, warm, friendly, honest and most of all endlessly entertaining. He always said that if ‘I had another chance at life I would be an actor’.

“I honestly thought that dad was going to outlive us all with his energy for life, but that wasn’t the way he wanted it. “He knew I was ready to just do it all and he had all the confidence in me leading Architects Pacific in a direction that is his legacy and run it the way he would have, with integrity. “My mother, Gilly Huggett still remains as a director and shareholder and stands beside me in the running of Architects Pacific, she is a very strong, resilient woman who has been a force to be reckoned with in the architectural field in Fiji as well – also a phenomenal caterer and chef!”

Architects Pacific has survived in Fiji for 50 years and has been through all its ups and downs. Ms Huggett said Stu was a stubborn man and would never every give up on Fiji no matter what and was always able to guide the staff and the company out of some very uncertain and dark times with such a peaceful and optimistic attitude. “He truly was the eternal optimist, nothing ever brought him down ‘everything always works itself out in the end, no need to worry’ he would say.”

She says Architects Pacific, is of course, traditionally an architectural consultancy firm.

“We currently have over 30 staff across all three and envisage that this will only increase as we progress.”