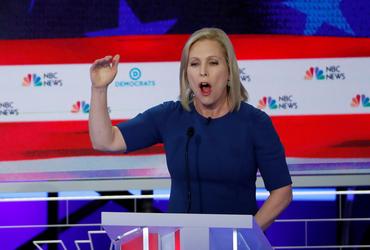 YOUNGSTOWN, Ohio (Reuters) – U.S. Senator Kirsten Gillibrand rolled through Pennsylvania, Ohio and Michigan last week on a bus emblazoned with “He broke it, we’ll fix it,” as part of a campaign tour highlighting what she called President Donald Trump’s “broken promises” to the region.

Gillibrand told laid-off auto workers in Youngstown, Ohio, and healthcare workers in Pittsburgh she would repair the damage of Trump’s presidency if voters choose her as the Democratic nominee to take him on in November 2020.

But to do that, she will require a significant boost. The New York senator is stuck in the bottom of national polls of the field’s 25 candidates, and time is running out.

Posing for selfies with voters after a town hall on gun violence in Bloomfield Hills, Michigan, on Friday, Gillibrand said she needed thousands more supporters to qualify for the third Democratic primary debate in mid-September.

“I’ve got a month and a half to accomplish that,” she said in an interview with Reuters. “It’s a heavy lift, but I’m going to do it.”

To earn a spot in the September debate, candidates must draw at least 2% support in four national or early-voting state polls, and have 130,000 unique donors, including 400 in 20 separate states.

Gillibrand failed to catch fire after a spirited performance during the first televised debate in June. She remained at just 1% support among Democratic voters in a Reuters/Ipsos poll taken June 29-July 2, and was below 1% in a NBC/WSJ poll released on Thursday.

Gillibrand’s campaign did not disclose her latest fundraising total ahead of the second-quarter filing deadline on Monday, a likely sign she did not raise as much money as many of her opponents.

In any other election cycle, Gillibrand and rivals including fellow Senators Amy Klobuchar and Cory Booker, as well as former Obama administration housing chief Julian Castro, would be top-tier candidates, Democratic strategists said.

But she is in a crowded field competing for donors and media attention with nationally known contenders like former Vice President Joe Biden and Senator Bernie Sanders.