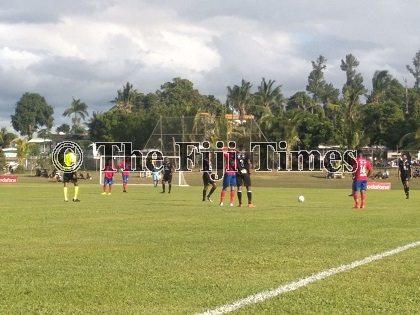 Action between Ba and Navua at the Fiji FA Academy Ground in Ba. Picture: BALJEET SINGH.

After three and a half months of no sporting events in the country because of COVID-19, defending champions Ba defeated Navua 5-3 in the Vodafone Premier League goal fest at the Fiji Football Association Academy ground in Namosau, Ba yesterday.

Ba featuring four debutants in the starting line-up did not show any signs of weakness dominating the fixture showing superior attacking prowess with the likes of Abbu Zahid, Samuela Drudru and Saula Waqa upfront.

The Men in Black started the fixture strongly scoring two goals in the first 10 minutes’ to have a solid platform to gain victory.

With the strict guidelines in place for social distancing there was little rejoice shown by the players as the goals were scored.

The handsome win lifts Ba to fourth position on the VPL points table from seventh.

“We will take each game at a time,” he said.

Navua coach Sailosi Danford said it was back to the drawing board for his side after suffering their third defeat in the competition.

He said they went into the match with an aim to win but things did not go their way.

Striker Samuela Drudru opened the account for Ba in the third minute with an easy tap in following a low cross from Sumeet Goundar on the right flank.

Saula Waqa doubled Ba’s lead in the 10th minute with a powerful drive.

Navua pulled one back in the 27th minute after captain Vineet Chand slotted in a penalty kick.

The home team started the second spell on the same note as the first half pushing up in attacking and was rewarded with nippy Abbu Zahid rifling in from the edge of the box.

Waqa got his double in the 67th minute.

Veteran Apisai Smith marked his return to local football scoring the second goal for Navua in the 77th minute and then nailed a consolation penalty in the dying stages.

Zahid scored his second goal in the 78th minute.