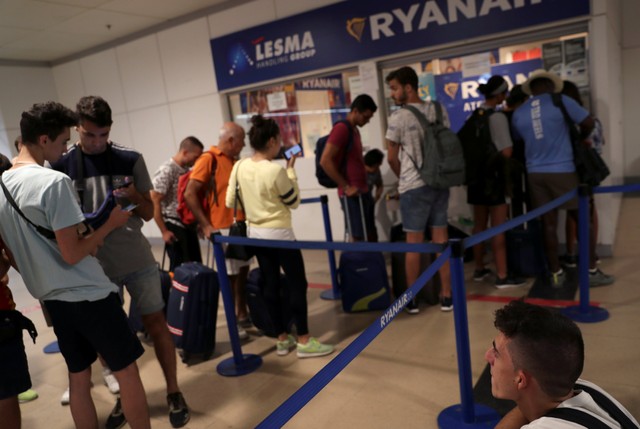 The Irish low cost carrier, Europe’s largest by passenger numbers, is in the middle of its worst week of stoppages in more than three decades of flying as it struggles in talks with trade unions whom it has decided to recognize for the first time.

Around a quarter of its Dublin-based pilots staged their third 24-hour stoppage in two weeks on Tuesday while cabin crew in Italy, Spain, Portugal and Belgium began a two-day strike on Wednesday, prompting Ryanair to cancel more than 12 percent of its flights.

Warning investors on Monday of more strikes this summer, Chief Executive Michael O’Leary said he would consider moving aircraft from Ireland, Belgium and Portugal and acted swiftly within 48 hours.

“If our reputation for reliability or forward bookings is affected, then base and potential job cuts such as these at Dublin are a deeply regretted consequence,” Ryanair Chief Operating Officer Peter Bellew said in a statement.

Ryanair’s directly employed pilots who are members of its Irish trade union responded by calling a fourth one-day strike on August 3 and warned of further stoppages unless the airline changes tack.

The airline’s decision to begin redundancy consultations with over 100 Dublin pilots and more than 200 cabin crew who were issued with 90-day protective notice was a “reckless” and “provocative” move that will likely harden the pilots’ resolve, the Forsa/IALPA trade union said in a statement.

Ryanair said it expected few route closures from Dublin as a result of reducing the fleet to 24 from 30, but that some routes may suffer frequency reductions as it moves the aircraft to its Polish airline, Ryanair Sun, which it said was enjoying rapid growth.

Transfers to Poland will be offered in order to minimize any redundancies, Ryanair added.

In a note to staff seen by Reuters, Bellew said not everyone who received the 90-day notice would be made redundant or be required to transfer, so those with an excellent performance record should “try not to worry.”

Ryanair, which operates from 86 bases in 37 countries and carried 130 million passengers last year, averted widespread strikes before last Christmas with a last-minute U-turn to recognize unions for the first time in its 32-year history.

However it has since struggled to reach agreement on terms with several of them and some of its customers whose flights were among the 600 canceled on Wednesday and Thursday took to social media to voice their dissatisfaction.

“Hi @Ryanair. You’ve canceled our flight to Pisa from Stansted. We’re supposed to be getting married… Your rep says ‘nothing we can do’. That right?” Andrew Hogan wrote on Twitter.

Pilots are demanding more transparent systems for promotions and transfers to reduce what they say is excessive management discretion over their careers, while cabin crew want local contracts and better conditions.

O’Leary, who says his staff have some of the best conditions in the low-cost sector, said on Monday that he would be “far happier take a hit to our earnings this year, but convey the message that we will face down strikes.”

Shares in the airline, which earlier this week matched a 12-month intraday low hit in December when it shocked markets by recognizing unions, were 1.5 percent higher at 1310 GMT.