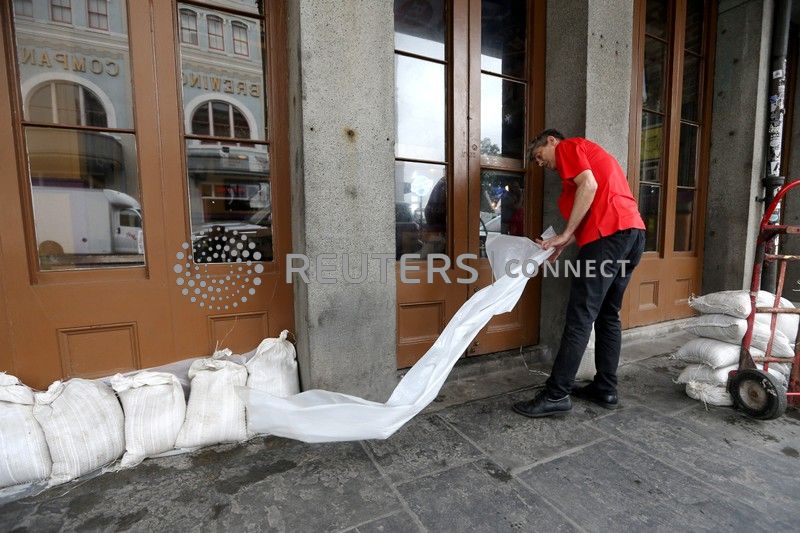 NEW ORLEANS/WASHINGTON (Reuters) – Tropical Storm Barry, which is expected to flood New Orleans and threaten lives along the Mississippi River, is being fueled by warmth in the Gulf of Mexico that was likely exacerbated by climate change, scientists said on Friday.

While no single storm can be linked directly to climate change, the trend of warming air and seas around the globe has caused conditions that scientists say will, on average, make storms stronger and rainier.

She said warmer air in the Gulf of Mexico will likely add fuel to the storm, while warmer ocean temperatures there will fill it with vast amounts of evaporated water that can lead to dangerous flooding.

Louisiana officials have warned residents that Barry, expected to make landfall on Saturday, could inundate areas along the lower Mississippi with up to 20 inches (51 cm) of rain.

The lower Mississippi has already been running at flood stage for months after the so-called “bomb cyclone” and other storms starting in March that dumped huge volumes of rain on Nebraska, Iowa and Missouri – which flowed down the Mississippi and could further feed moisture to Barry, scientists said..

“The water over land actually helps the storm,” Kevin Trenberth, a senior scientist at the U.S. National Center for Atmospheric Research, a federally funded office, said about the double-whammy.

Residents were ordered to evacuate some nearby areas, but New Orleans Mayor LaToya Cantrell said no evacuations were ordered from the city. Cantrell, a Democrat, said at a news conference she believes climate change is making storms worse. “It’s real. We’re seeing it through the country and the world.”

The city is particularly vulnerable to storms because it is “below sea level, protected by levees and pumping systems that remove rainwater, which cannot drain naturally,” the Environmental Protection Agency said in 2016 on its website, an entry moved to a web archive by the Trump administration.

Not all storms will be wetter as a result of climate change, but on average more of them will https://www.nature.com/articles/s41586-018-0673-2, scientists said.

In a recent record wet storm, Hurricane Harvey flooded the Houston area in 2017, killing 68 people and causing an estimated $125 billion in property damage. In 2005, Hurricane Katrina slammed the New Orleans region and killed 1,500 people with high winds and levee-bursting floods.

“We might have four or five times as much warming over the coming century as the last, so these kinds of weather events are likely to get much, much worse,” said Andrew Dessler, a climate scientist and professor of atmospheric sciences at Texas A&M University.

Development in the New Orleans region, a major oil hub, has made the area more vulnerable to storms, with the removal of wetlands which help protect coasts. Trepanier said the city has made some advances to protect against storm surge, but when storms meet river flooding it makes for a “more combined and complicated risk.”

President Donald Trump, a Republican, has cast doubt on mainstream climate change science and announced his intention to withdraw the United States from the 2015 Paris agreement, an international accord to fight climate change, saying it burdens the country with costs.

He boasted about his administration’s environmental record at a speech at the White House this week, but did not mention climate change, and he has rolled back Obama-era regulations targeting carbon emissions.

The EPA, which is in change of toxic waste sites and was forced to address flooded sites that released dangerous chemicals into waters during Hurricane Harvey, did not immediately respond to a request for comment about Barry.

Green group Environment America said there were more than 100 Superfund environmental cleanup sites and 17 oil refineries in the path of the storm.