Stephens splits with coach Groeneveld ahead of U.S. Open 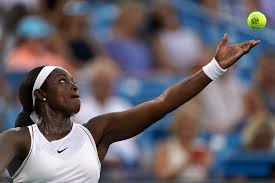 (Reuters) – American Sloane Stephens has parted ways with her coach Sven Groeneveld less than a week before the U.S. Open gets underway, the former champion has said.

Stephens, who only teamed up with Dutchman Groeneveld in May, has not announced a replacement ahead of the year’s final Grand Slam, which begins on Monday.

“After much thought, Sven Groeneveld and I have decided to go our separate ways,” 2017 champion Stephens said in a tweet.

“Change is never easy, but I’m so appreciative of our time together. Onward!”

Groeneveld, who has previously coached former world number ones Ana Ivanovic and Maria Sharapova, thanked Stephens for their time together.

“I wish you a strong @usopen, you have all it takes, I believe in you!” he wrote on Twitter.