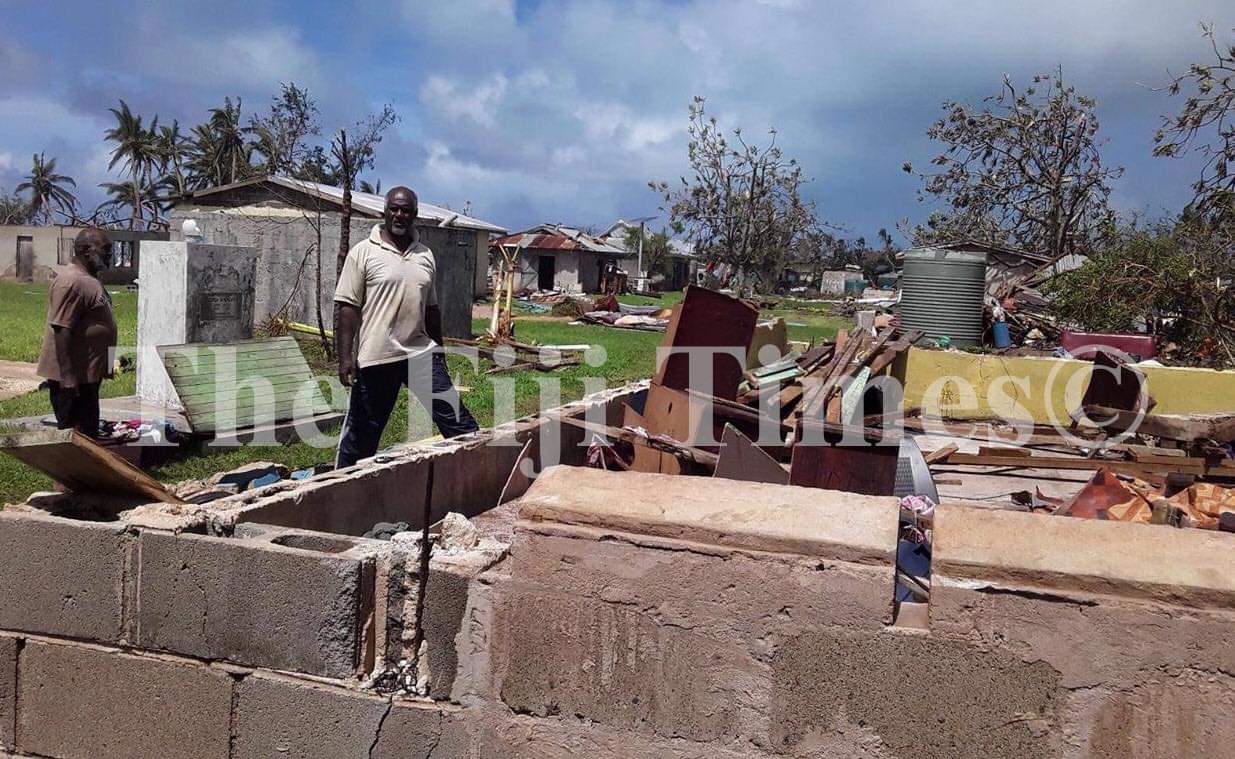 Villagers of Taunovo in Vatulele stand in front of what's left of a house destroyed by TC Harold. Picture: SUPPLIED/MALAKAI KANIHEWE

No village in Ono-i-Lau was spared when Severe Tropical Cyclone Harold unleashed devastating speeds of wind Wednesday night, flattening homes and unhinging roofs in its wake.

“We thought Cyclone Winston and Cyclone Gita was the worst, we were wrong,” said Ono Levu District schoolteacher Sekope Vunisa.

“In every village that I have been to across the island, from Lovoni to Doi, there is rubble and debris where there once were homes,” he shared.

The wrath of STC Harold was felt on the small island around midnight Wednesday when the eye of the cyclone lay approximately 63 km north of Ono-i-Lau. Wind speeds were forecasted to be around 120 knots per hour.

“We could hear it and it sounded like a big jet plane passing by the island, it hovered for half an hour.

“When I looked out I could see roofing iron flying everywhere.”

Mr Vunisa said in his village of Nukuni, only four of the 14 houses were left unscathed.

“The remaining 10 houses had either lost a roof or were completely demolished.”

It is estimated that around 47 to 50 homes were either destroyed or damaged across the entire island.

Although no lives were lost and no injuries were recorded, Mr Vunisa said the worry now was on food supply, with vegetation and plantations on the islands completely destroyed.

Stocks in the canteens were also running low.

“It has been a month since the last ship came to the island and with restrictions due to COVID-19, we don’t know when the next boat will arrive.

“Right now we are rationing the canned food items that still remain in the canteens, but that is running low and I fear it won’t be enough to cater for everybody.”

Meanwhile, in Doi Village on Doi Island, some nine of the 22 families lost their homes, and ravaged plantations and fruit trees –vital sources of sustenance on the island.

Fiji Times Online has established that affected families are now billeted in four evacuation centres – including three classrooms, and spread out well to ensure there were less than 20 people in a room.

There were no reports of injuries.