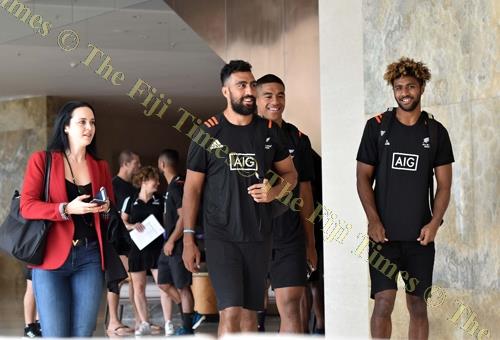 Waisake Masirewa (right) of New Zealand 7's team at the hotel in Hong Kong yesterday. New Zealand team is pooled together with Fiji,Russia and Samoa.Picture: RAMA

Bower said the athletes had been asked to remain focused for the games despite the devastation of the cyclone which claimed four lives and caused floods in the Western Division.

As the athletes continue to prepare for the games which opens tonight at Carrara Stadium, Bower said the athletes had undergone counselling to keep them focused on the games.

“While they are aware of things happening at home, they continue to remain focused on the games,” he said at the Games Village yesterday. They know they have problems at home and the section managers are helping them by arranging for counselling sessions to help our athletes. We know it is hard and we will play for those who were affected by the cyclone and the floods

“Netball and beach volleyball players were among the first who took advantage of this and while our condolences and sympathies are with those affected, our athletes continue their preparation and are working hard to remain focused on the games.”

He could not say if any of the athletes’ family were among those affected by the cyclone. Meanwhile training continued yesterday for Team Fiji athletes. Bower said the spirt in camp was high as athletes looked forward to the opening ceremony and the start of the competition tomorrow.

“Our teams have settled well and everyone is looking forward to the start of the games. We have been conducting technical meetings with section managers for final reports. Some of the teams have had friendly matches such as beach volleyball on their games venues to have a feel of the facility. Other teams had visited their match venues for a familiarisation tour to know where they will be playing.”

He said a lot of teams had been on the lookout for Fiji, especially in rugby 7s, weight-lifting and netball.

Fiji plays Jamaica in netball and Manueli Tulo of weight-lifting are among those competing tomorrow.