Statistics — Fiji on the upper hand 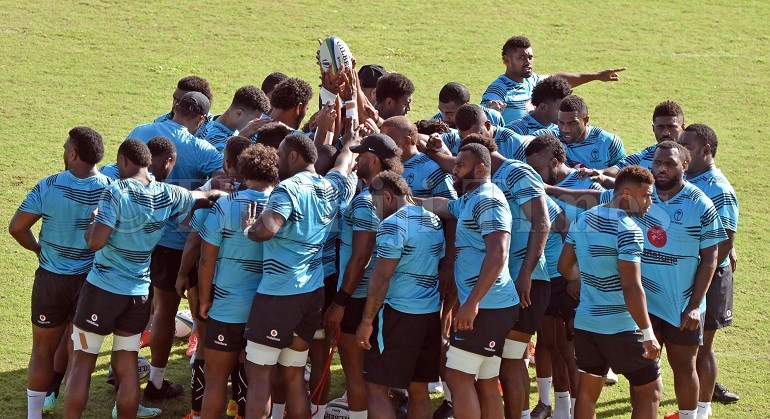 Members of the Flying Fijians squad after a training session. Picture: JONA KONATACI

Much has been said about the Pacific Nations Cup 2022 match between the Flying Fijians and the Ikale Tahi Tonga clash at the HFC Bank Stadium in Suva today.

The game is scheduled to start at 3.30pm. On paper, the Fijians look to be the in-form side, having nine players who were part of the Swire Shipping Fijian Drua during the Super Rugby Pacific competition in the starting 15s.

Head coach Vern Cotter named five in the forwards and four in the backline.

For some reason, it is a wise move by the New Zealander because these Fijian Drua players have bond in their past games and it is an advantage for him in selecting his run-on side.

Manasa Saulo, Tevita Ikanivere and Hareiti Hetet have been consistently playing for the Fijian Drua.

Saulo, 33, has been the revelation for the Fijian Drua’s outstanding scrum with 13 games under his name this season.

Hetet will make a formidable partner with Saulo while Ikanivere is poised to play a crucial role in raking the ball during scrums and his accurate throw is what the tall loose men need.

Ikanivere, even though found himself out of the Fijian Drua campaign on the reserve at the end of the competition, had difficulties with his line-out throw.

Isoa Nasilasila has been proving his selection in the Super Rugby franchise with his debut year and made it to the Flying Fijians starting side.

He can be used in the line-out and his round-the-field presence gave him the greenlight ahead of Apisalome Ratuniyarawa.

Nadroga hard man Rusiate Nasove was chosen ahead of Albert Tuisue and Levani Botia. Nasove is fast with ball in hand and was used by Drua coach Mick Byrne in some of their games as a reserve winger.

What more can the Fijian fans ask when you have giant Mesulame Kunavula who will partner Nasove in the flankers while Kadavu young chief Albert Tuisue will guide the base of the scrum.

You have tall timber Iliesa Ratuva to count on when contesting for the line-outs.

For the Tongans, they might have video clips of the Fijian players but Cotter has other ideas on how to utilise his players. In the backline, Drua pivot Teti Tela will steer the move that has Namosi former players in Kalaveti Ravouvou and Vinaya ‘Bossman’ Habosi.

The deadly combination of Ravouvou and skipper Waisea Nayacalevu will be something the Tongans have to cater for in the form of Charles Piutau, Malakai Fekitoa and former Wallaby star Isileli Folau.

In the reserves, Peni Matawalu will come in for Frank Lomani and he will change the course of the game in the second half with his quick deliveries from the base of the ruck.

That will make the competition exciting.

Olympic Games gold medallist Jiuta Wainiqolo and the dancing feet of Setareki Tuicuvu are poised to entertain the crowd at the Laucala Bay sports complex.

Yasawa flyer Setareki Tamanivalu will make his maiden appearance for his country of birth after a three-year stand down from representing New Zealand alongside Manasa Mataele.

Mataele played for the Crusaders in his entire Super Rugby journey and in 2021 he accepted a call to play for the Flying Fijians.

For the Tongans, they have a relatively unknown side with big names such as Fekitoa, Bristol Bears weapon Piutau and Folau to move the side.

Against Tonga, the Fijians will have to expect an unpredictable and a very hard game.