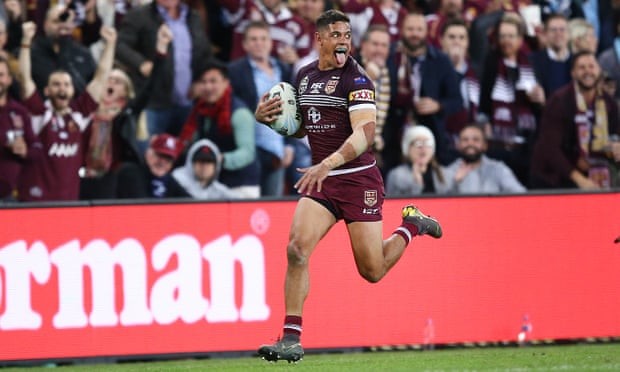 Dane Gagai streaks away to score for Queensland in their victory over NSW in State of Origin Game 1.Picture: FOX SPORTS

QUEENSLAND opened the 2019 State of Origin series with an 18-14 victory over New South Wales at the Suncorp Stadium last night.

Fox Sports reports the Maroons had four opportunities – rightly – denied by The Bunker and blew a number of other chances before overcoming an 8-0 deficit to win 18-14. The final score did not reflect Queensland’s dominance with the Maroons owning both the ball and field position over the final 55 minutes.

New South Wales opened the scoring with a 12th minute penalty goal slotted by Nathan Cleary but it was a missed opportunity just minutes earlier that left the Blues faithful aghast when the No 7 put too much power on a grubber that bounded dead with only star custodian James Tedesco in pursuit.

The Maroons missed a chance not long after when Dane Gagai was tackled just short following a Will Chambers break. The Maroon used the entire width of the field with Corey Oates spectacularly diving over on the opposite side only to be denied when he put a foot into touch.

A barrage of pressure on the Queensland goalline though saw the Maroons finally crack when Tedesco – who was simply brilliant in the opening 20 minutes – shimmied past Cameron Munster to create an extra man down the right to send recalled centre Josh Morris crashing over.

The Maroons appeared to hit back in the 28th minute when a Ben Hunt grubber bounced off the upright with Dylan Napa the unlikely man to fall on the ball. He did not, however, according to The Bunker, as he made a meal of landing on the pill. Three minutes later Cameron Munster busted the Blues line and again they could not finish it off, Will Chambers getting nabbed just metres from the line.

The Maroons dominated the last 15 minutes of the first half but like a nightclub bouncer, the Blues turned back all that was thrown at them, going into half-time with an 8-0 lead.

It wasn’t until the 53rd minute that Queensland opened their account and it was master finisher Corey Oates launching himself like “Superfly” Jimmy Snuka to make a deft Kalyn Ponga cut out count. The Newcastle fullback then put a beautiful fade on the conversion to sneak inside the left upright and send the score to 8-6.

Three minutes later and Michael Morgan was millimetres from giving the Maroons the lead, slicing over down the left only to be held up by who else but Tedesco.

Latrell Mitchell had an unhappy night, lacking energy in attack and sound decision-making in defence. He capped an ordinary outing with a professional foul on Matt Gillett that allowed Queensland to level the scores going into the final 20 minutes.

That deadlock was broken with just 12 minutes to play when Gagai ran the length of the field after collecting a gift from Jack Wighton – an intercept off a pass that was nothing short of recklessly negligent. A minute later and the Maroons put a gap on the scoreboard with Gagai, a tryscoring phenom at Origin level, finishing with aplomb, exposing the Blues left edge defence again. It was his 11th try in 11 games donning the Maroon.

Panicked and desperate, the Blues finally got some field position as the clock ground down and gallant middle Jake Trbojevic crashed over to provide a grandstand finish.

Playing with momentum and the energy of a raucous home crowd, Queensland dug deep to close out a famous win.