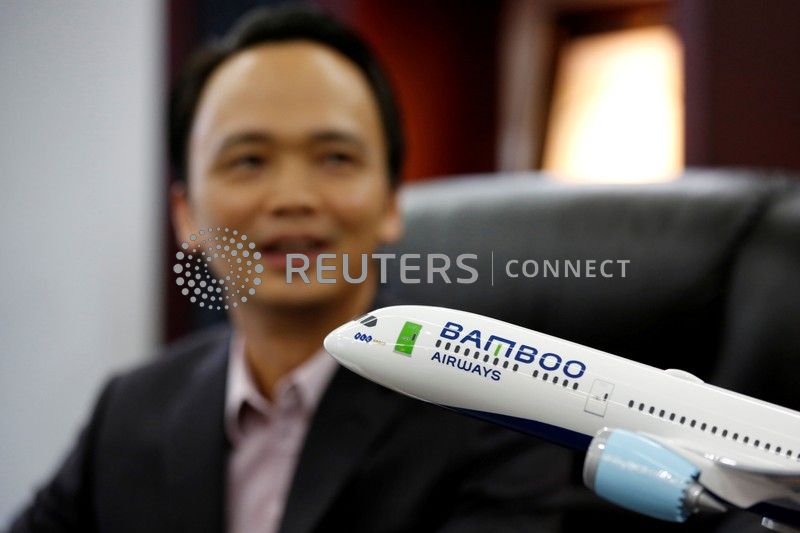 HANOI (Reuters) – Bamboo Airways launched its long-delayed maiden commercial flight on Wednesday to become the fifth Vietnamese airline, heightening competition in the aviation sector of the Southeast Asian nation which is emerging as a popular tourist destination.

The inaugural flight of the start-up airline, owned by property and leisure firm FLC Group, landed at Hanoi’s Noi Bai Intl airport at 0830 local time after taking off from Ho Chi Minh City, Bamboo Airways said in a statement. It carried 180 passengers and five crew members.

The flight, which came after the launch date was postponed twice, would be welcome news for planemakers Boeing and Airbus, adding a measure of certainty to the airline’s orderbook.

Bamboo Airways signed a provisional deal in July to buy 20 Boeing 787-9 wide-body jets worth $5.6 billion at list prices, and a memorandum of understanding in March with Airbus for up to 24 A320neo narrow-bodied aircraft.

The launch, though, comes at a time aviation competition in the country is heating up and its aviation infrastructure is getting overloaded. Other local airlines operating are Vietnam Airlines, Jetstar Pacific Airlines, Vietjet Aviation and Vietnam Air Services Co.

“Bamboo will compete with other airlines with its service quality and other factors that other airlines don’t have. We are not concerned about the constraints in aviation infrastructure in Vietnam, as the infrastructure keeps expanding rapidly and there haven’t been any major congestions,” he told Reuters.

Quyet said in November the airline will leverage on the parent’s vast number of golf courses to draw in customers.

Bamboo Airways will operate eight domestic flights on Wednesday. It expects to fly on 37 domestic routes this year and also launch international flights to Asian countries, starting with Japan, Korea and Singapore.

Quyet said on Wednesday there was no plan yet to list Bamboo Airways on the stock market.

Vietnam, one of Asia’s fastest growing economies, has recorded double-digit expansion in domestic and inbound passenger numbers. The government aims to spur tourism with visa exemptions and by promoting investment in the industry. The number of foreign arrivals in Vietnam reached a record high last year, rising 19.9 percent to 15.5 million, according to the Government’s General Statistics Office. Of the arrivals, 12.5 million came by air, up 14.4 percent. The GSO said Vietnam’s moves to offer e-visa for tourists from 40 countries and exempt visas for tourists from Eastern European countries have helped boost foreign arrivals. Bamboo Airways said earlier it would expand its fleet to 40-50 by the end of this year, despite regulatory restrictions and infrastructure constraints.

Vietnam’s biggest airport, Tan Son Nhat, serving Ho Chi Minh city in the south, receives about 10 million more passengers per year than it is designed to serve. The government is planning a second international airport at Long Thanh, 40 km (24 miles) east of Ho Chi Minh City, that will serve 25 million passengers a year starting in 2025.