Stakes rise for Boeing as EU, Canada step up scrutiny of 737 MAX after crashes 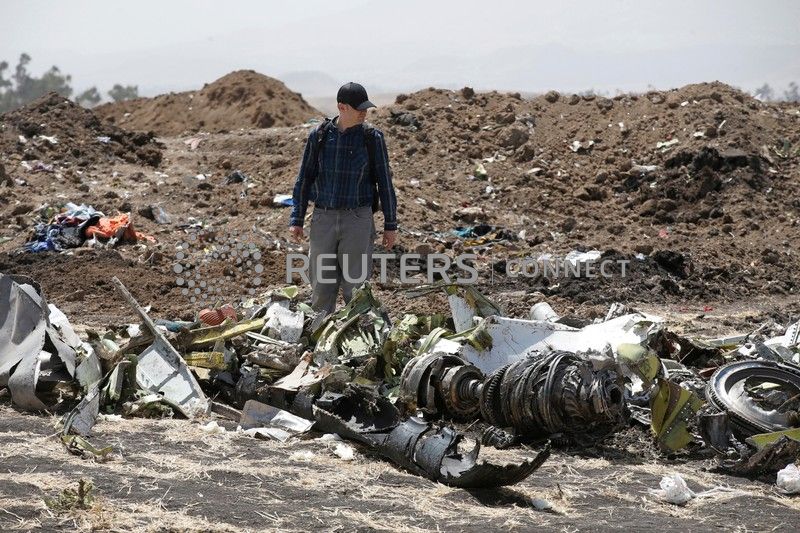 FILE PHOTO: American civil aviation and Boeing investigators search through the debris at the scene of the Ethiopian Airlines plane crash, near the town of Bishoftu, southeast of Addis Ababa, Ethiopia March 12, 2019. REUTERS/Baz Ratner/File Photo

ADDIS ABABA/PARIS/WASHINGTON (Reuters) – Europe and Canada said they would seek their own guarantees over the safety of Boeing’s 737 MAX, further complicating plans to get the aircraft flying worldwide after they were grounded in the wake of two accidents killing more than 300 people.

As the U.S. Federal Aviation Administration (FAA) analyses Boeing’s plans for a software fix prompted by the first crash five months ago, the European Union’s aviation safety agency EASA promised its own deep look at any design improvements.

“We will not allow the aircraft to fly if we have not found acceptable answers to all our questions,” EASA Executive Director Patrick Ky told an EU parliament committee hearing.

Canada said it would independently certify the 737 MAX in the future, rather than accepting FAA validation, and would conduct an “exhaustive review” of the automated flight control system in MAX aircraft, known as MCAS, which experts believe may have played a role in both crashes.

Canada also said it would send a team to help U.S. authorities evaluate proposed design changes and decide if others were needed.

Boeing Co declined to comment. The company on Tuesday reshuffled the top executives in its commercial airplanes unit to focus on the accident investigations.

U.S. government officials do not believe the two crashes will lead to a worldwide shift away from FAA certifications but U.S. lawmakers, as well as federal prosecutors, are scrutinising the certification of the Boeing 737 MAX.

The chairman of the U.S. House of Representatives transportation committee and another key Democrat asked the Transportation Department’s inspector general on Tuesday to examine key decisions made by the FAA in certifying the 737 MAX jet for use.

The FAA declined to comment on that request or on actions taken by other countries, but said in a statement that “the current, historic aviation safety record in the U.S. and globally is achieved through the FAA’s robust processes and full collaboration with the aviation community.”

The U.S. Transportation Department’s inspector general plans to audit the FAA’s certification of the jet, an official with the office said on Tuesday. The office can recommend changes or improvements to how the FAA operates. Boeing said it would cooperate with the audit.

The unusual public intervention by two leading regulators came as a probe into the final minutes of Ethiopian Airlines Flight 302 turned toward secrets hidden in the cockpit voice recorder.

The voices of Captain Yared Getachew and First Officer Ahmednur Mohammed could help explain the March 10 crash of the Boeing 737 MAX that has worrying parallels with another disaster involving the same model off Indonesia in October.

The twin disasters killed 346 people, but there is no conclusive evidence so far that they are linked.

Black box data was downloaded in France but only Ethiopian experts leading the probe have access to the dialogue between Getachew, 29, and Mohammed, 25. The data was back in Addis Ababa on Tuesday, sources familiar with the probe told Reuters.

Experts believe the new MCAS system, which is designed to stop stalling by dipping the nose, may have been a factor in both crashes, with pilots unable to override it as their jets plunged downwards.

Both came down just minutes after take-off after erratic flight patterns and loss of control reported by the pilots. However, every accident is a unique chain of human and technical factors, experts say.

The prestige of Ethiopian Airlines, one of Africa’s most successful companies, and Boeing, the world’s biggest planemaker and a massive U.S. exporter, are at stake.

Lawmakers and safety experts are questioning how thoroughly regulators vetted the MAX model and how well pilots were trained on new features. For now, global regulators have grounded the existing fleet of more than 300 MAX aircraft, and deliveries of nearly 5,000 more – worth well over $500 billion (£377 billion) – are on hold. (Graphic: https://tmsnrt.rs/2Hv2btC)

Pressure on Chicago-headquartered Boeing has grown with news that federal prosecutors are scrutinising how carefully the MAX model was developed, two people briefed on the matter said.

The U.S. Justice Department is also looking at the FAA’s oversight of Boeing, one of the people said. And a federal grand jury last week issued at least one subpoena to an entity involved in the plane’s development.

U.S. President Donald Trump plans to nominate former Delta Air Lines executive Steve Dickson to head the FAA on Tuesday. The agency has been without a permanent head for 14 months.

In the hope of getting its MAX line back into the air soon, Boeing has said it will roll out a software update and revise pilot training. In the case of the Lion Air crash in Indonesia, it has raised questions about whether crew used the correct procedures.

Development of the 737 MAX, which offers cost savings of about 15 percent on fuel, began in 2011 after the successful launch by its main rival of the Airbus A320neo. The 737 MAX entered service in 2017 after six years of preparation.

Argus Research cut Boeing stock to “hold” from “buy”, giving the planemaker at least its fourth downgrade since the crash, Refinitiv data showed. Its shares rose 0.3 percent on Tuesday, to close at $373.43. They are still down more than 11 percent since the crash in Ethiopia.

Various firms are reconsidering Boeing orders, and some are revising financial forecasts given they now cannot count on maintenance and fuel savings factored in from the MAX.

Air Canada said it intended to keep its MAX aircraft grounded until at least July 1, would accelerate intake of recently acquired Airbus A321 planes, and had hired other carriers to provide extra capacity meantime.

Beyond the corporate ramifications, anguished relatives are still waiting to find out what happened.

Many have visited the crash site in a charred field to seek some closure, but there is anger at the slow pace of information and all they have been given for funerals is earth.

“I’m just so terribly sad. I had to leave here without the body of my dead brother,” said Abdulmajid Shariff, a Yemeni relative who headed home disappointed on Tuesday.