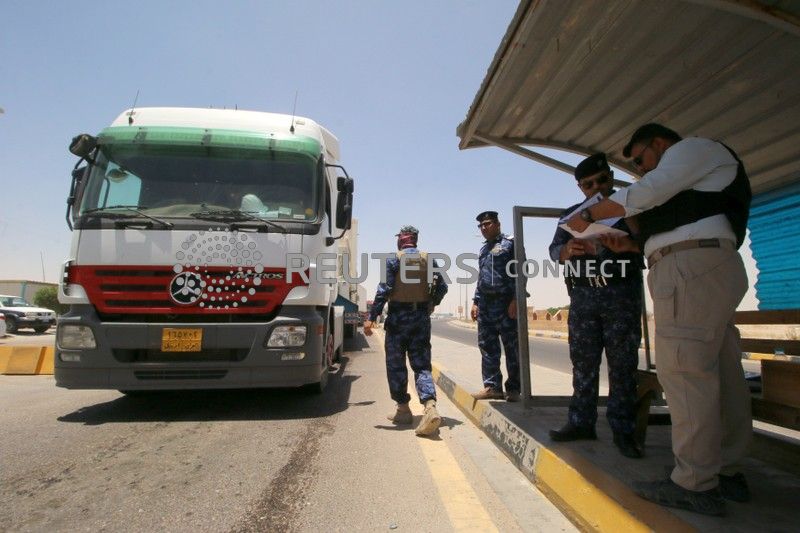 Iraqi security officers stay guard at the entry of Zubair oilfield after a rocket struck the site of residential and operations headquarters of several oil companies, at Burjesia area in Basra, Iraq June 19, 2019. REUTERS/Essam Al-Sudani

There was no immediate claim of responsibility for the attack near Iraq’s southern city of Basra, the fourth time in a week that rockets have struck near U.S. installations. A second rocket that landed in another nearby area did not explode, one official said.

Three previous attacks on or near military bases housing U.S. forces near Baghdad and Mosul caused no casualties or major damage. None of those incidents were claimed.

An Iraqi security source said it appeared that Iran-backed groups in southern Iraq were behind the Basra incident.

“According to our sources, the team (that launched the rocket) is made up of more than one group and were well trained in missile launching,” the security source said.

He said they had received a tip-off several days ago the U.S. consulate in Basra might be targeted but were taken by surprise when the rocket hit the oil site.

Iranian officials have made no comment about the attack but have strongly denied all other allegations against them of attacking energy tankers and facilities in the region.

Abbas Maher, mayor of the nearby town of Zubair, said he believed “groups linked to regional powers”, a reference to Iran, had specifically targeted Exxon to “send a message” to the United States.

U.S.-Iranian hostility has risen since President Donald Trump withdrew Washington from a 2015 nuclear deal with Iran and other world powers in May last year.

Trump has since reimposed and extended U.S. sanctions on Iran, forcing states to boycott Iranian oil or face sanctions of their own. Tehran has threatened to abandon the nuclear pact unless other signatories act to rein in the United States.

The U.S. face-off with Iran reached a new pitch following attacks on oil tankers in the Gulf in May and June that Washington blames on Tehran. Iran denies any involvement.

While the long-time foes say they do not want war, the United States has reinforced its military presence in the region and analysts say violence could nonetheless escalate.

Some Western officials have said the recent attacks appear designed to show Iran could sow chaos if it wanted.

Iraqi officials fear their country, where powerful Iran-backed Shi’ite Muslim militias operate in close proximity to some 5,200 U.S. troops, could become an arena for escalation.

The United States has pressed Iraq’s government to rein in Iran-backed paramilitary groups, a tall order for a cabinet that suffers from its own political divisions.

Iraq’s military said three people were wounded in Wednesday’s strike by a short-range Katyusha missile. It struck the Burjesia site, west of Basra, which is near the Zubair oilfield operated Italy’s Eni SpA.

Police said the rocket landed 100 metres from a part of the site used as a residence and operations centre by Exxon. Some 21 Exxon staff were evacuated by plane to Dubai, a security source said.

Zubair mayor Maher said the rocket was fired from farmland around 3-4 km (2 miles) from the site.

A second rocket landed to the northwest of Burjesia, near a site of oil services company Oilserv, but did not explode, he said.

“We cannot separate this from regional developments, meaning the U.S.-Iranian conflict,” Maher said.

“These incidents have political objectives … it seems some sides did not like the return of Exxon staff.”

Exxon had evacuated its staff from Basra after a partial U.S. Baghdad embassy evacuation in May and staff had just begun to return.

Burjesia is also used as a headquarters by Royal Dutch Shell PLC and Eni., according to Iraqi oil officials.

The officials said operations including exports from southern Iraq were not affected.

A separate Iraqi oil official, who oversees foreign operations in the south, said the other foreign firms had no plans to evacuate and would operate as normal.

A Shell spokesman said its employees had “not been subject to the attack … and we continue normal operations in Iraq.”

Eni said its operations were also proceeding as normal after the rocket exploded “several kilometres” from its facilities.

Wednesday’s rocket strike fits into a pattern of attacks since May, when four tankers in the Gulf and two Saudi oil pumping stations were attacked.

They have been accompanied by a spate of incidents inside Shi’ite-dominated Iraq, which is allied both to the United States and fellow Shi’ite Muslim Iran.

The attacks in Iraq have caused less damage but have all taken place near U.S. military, diplomatic or civilian installations, raising suspicions they were part of a campaign.

A rocket landed near the U.S. embassy in Baghdad last month causing no damage or casualties. The United States had already evacuated hundreds of diplomatic staff from the embassy, citing unspecified threats from Iran.

Iraqi officials say threats from Iran cited by Washington when it sent more forces to the region last month included the positioning by Iran-backed militias of rockets near U.S. forces.

Rockets hit on or near three separate military bases housing U.S. forces near Baghdad and in the northern city of Mosul in three separate attacks since Friday.

Iraq and Kuwait issued a joint statement during a visit by Kuwaiti ruler Emir Sheikh Sabah al-Ahmad al-Sabah calling for “wisdom” to avoid an escalation in the region.