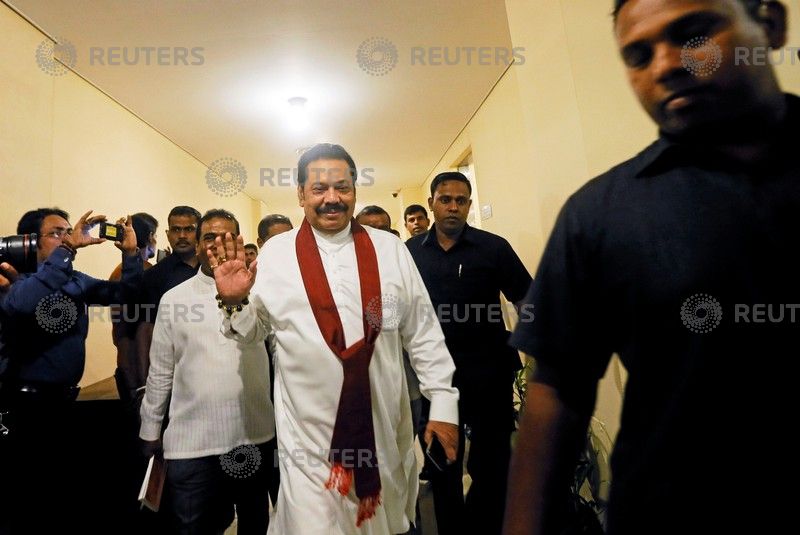 COLOMBO (Reuters) – Sri Lanka’s parliament on Friday voted to halt payment of ministers’ salaries and travel expenses, but it remained unclear how the move would impact the disputed government of Prime Minister Mahinda Rajapaksa whose ministers boycotted the vote.

The South Asian island has been locked in political gridlock for over a month since President Maithripala Sirisena replaced former Prime Minister Ranil Wickremesinghe with Rajapaksa, who was then twice sacked by parliament but has refused to resign.

Foreign countries have yet to recognise the new government.

Friday’s motion, which passed 122 to none in the 225-member parliament, follows a similar vote on Thursday to cut the budget to the Prime Minister’s office. Rajapaksa loyalists also skipped that vote, arguing the motion was invalid.

“The motion to cut down the expenditures of ministers, deputy ministers, and state ministers is passed,” parliament’s speaker Karu Jayasuriya said. He earlier said he would officially inform ministry secretaries of the decision.

The motion specifically was to prohibit top civil servants from paying out salaries and travel expenses.

However, one senior civil servant from a government ministry, speaking to Reuters on condition of anonymity, said it was unclear how such a vote would be applied in practice because there were questions over whether due process had been followed.

In a repeat of Thursday’s actions, Rajapaksa loyalists declared the vote illegal and called into question the impartiality of the speaker.

“The motion today presented is illegal and we have mentioned it to the speaker too. We will not attend such illegal motions,” Anura Priyadharshana Yapa, a minister in Rajapaksa’s disputed government, told reporters before the proceedings started.

Rajapaksa’s party argues that as the president never accepted no confidence votes against its government, it remains in power. The motions presented on Thursday and Friday are based on the assumption they have been sacked.

Rajapaksa presided over a government victory over Tamil rebels in 2009, ending a bloody 26-year civil war.