Springbok lock on his way home 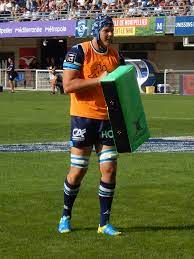 Springbok lock Nicolaas Janse van Rensburg will miss the remainder of the Rugby Championship after being forced to withdraw from the squad due to personal reasons.

Janse van Rensburg, who made his Springbok debut against Argentina in Nelson Mandela Bay, was one of five specialist locks in the Springbok touring squad, with the others being Lood de Jager, Eben Etzebeth, Franco Mostert and Marvin Orie.

Utility forwards Rynhardt Elstadt and Jean-Luc du Preez can cover lock and loose forward, which gives Springbok coach Jacques Nienaber sufficient options in the second row as they prepare to take on Australia in Brisbane on Saturday, and New Zealand thereafter in back-to-back Tests in Queensland.

“It is always sad to lose a player, and especially such a good team man, but Nicolaas has personal matters to attend to, and as a Springbok family we support him,” said Nienaber.