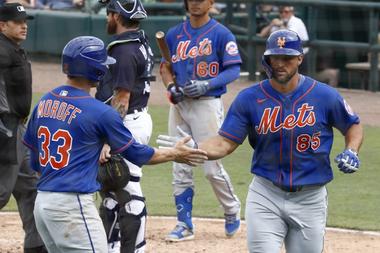 The New York Mets lost to the Detroit Tigers 9-6 at Lakeland, Fla., in Grapefruit League action on Tuesday, but Tim Tebow stole the show with his first home run in four spring training stints with the Mets.

The 32-year-old former Heisman Trophy winner and NFL quarterback sent a 3-2 pitch off Detroit right-hander Alex Wilson over the left-center wall in the sixth inning for a two-run blast, his first career spring extra-base hit. All nine of his previous spring training hits with the Mets were singles.

“I had a chance to see a few (pitches), and just tried to be tight and on time,” Tebow told MLB.com. “It feels really good. I feel like I’m seeing the ball pretty good.”

Tebow batted .150 (9-for-60) through three spring trainings with New York before this year. The outfielder batted .163 with four homers and 19 RBIs in 77 games with Syracuse of the International League (Triple-A) last season, which ended prematurely due to a deep finger laceration.