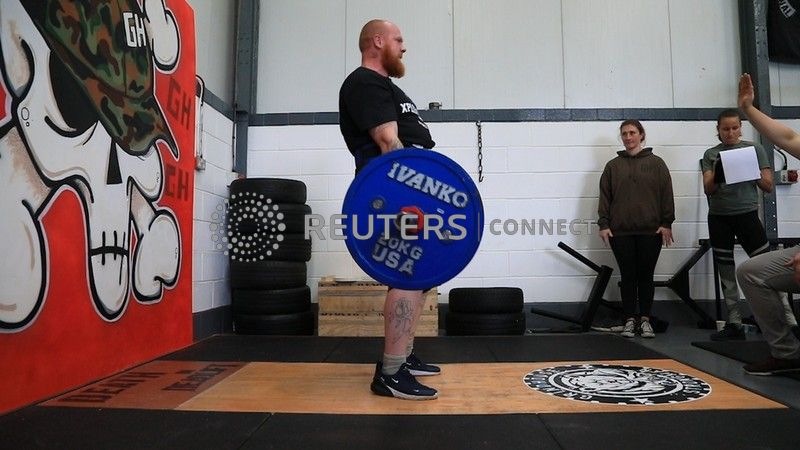 LONDON (Thomson Reuters Foundation) – Competitive sport was always a source of fun and community for Hannah Newman – until the British student came out as non-binary and considered giving up competing.

As someone who does not see themselves as either male or female, Newman began to question whether to stop participating in strength contests that divided down gender lines.

“Sport was one of the big things that was still ascribing a label to me, the label woman, and I felt the need to distance myself from that,” said Newman, 28, a postgraduate student in the sports hub town of Loughborough in central England.

“I’d always had something I was working toward … there was always competitive sport around, so the thought of going without that left me feeling quite lost.”

To fill the void, Newman last year co-founded Limitless, which was described as Britain’s first non-gendered strength competition, a strongman-style contest with mixed gender categories where all are welcome to take part.

Sports organisations worldwide are debating how best to accommodate gender minorities, with LGBT+ groups calling for greater inclusion while some athletes and women’s groups fear such changes are unfair to other female players.

About 1% of people are transgender or non-binary, according to British charity The Gender Identity Research and Education Society.

As the debate rages at school, recreational, and professional level, there is little scientific research tracking the impact of trans people in sport.

A 2015 study of eight female trans runners by medical physicist and trans woman Joanna Harper found their race times slowed so much they retained no advantage over non-trans women.

However academics from the University of Otago said current International Olympic Committee rules create an “intolerable unfairness” benefitting trans women, using an essay in the Journal of Medical Ethics to call for mitigation measures.

British Olympian swimmer Sharron Davies and runner Paula Radcliffe are among those who have publicly opposed trans women competing in women’s sports categories.

“I believe it is unfair in the extreme to expect women simply to move over and make way for male-to-female (MtF) transitioning athletes,” Davies, who won a silver medal at the 1980 Olympics, wrote on Twitter.

Radcliffe, a three-times winner of the London marathon, said competitors who have gone through male puberty “have certain advantages that women will not ever get”.

LGBT+ campaigners and researchers say failing to include everyone in sport may exacerbate mental health risks for LGBT+ people, who are known to be at higher risk of depression and other mental health issues than the general population.

For non-binary people it can be even worse as they may feel they don’t fit in either male or female spaces even if organisers and fellow sport players are welcoming, she added.

“The impact of being excluded is huge,” she said. “It emphasises being other or outsider in ways that are just not acceptable really.”

Many major sports organisations have policies aimed at ensuring female players are not up against trans women early in transition who have high testosterone levels.

A number of leading sports organisations, including the International Association of Athletics Federations (IAAF), allow trans women to compete if their testosterone levels are reduced to well below average for men but above normal for women.

But approaches are far from consistent. Some sporting groups require players to compete according to their birth certificate while others allow them to play by self-identity.

Trans U.S. powerlifter Mary Gregory was stripped of female world records at a strength contest in May after the RAW powerlifting federation running the event ruled that physically she was “actually male”.

There was also an outcry in 2017 when high school trans male wrestler Mack Beggs won a girls’ state championship in Texas after being refused permission to compete against boys under rules requiring athletes compete under their sex at birth.

“Things need to change,” said Beggs, 20, who made the documentary “Mack Wrestles” about his high-profile battle to be allowed to wrestle as a boy.

“It was absolutely crazy. I was only 17 years old. What 17-year-old needs to go through that all that unnecessary publicity, unnecessary exploitation, just because they’re trans and they want to compete?”

Some sports bodies are bringing in different formats that could help include more trans and gender minority players.

A number of sports bodies are also experimenting with mixed-gender events in moves that could benefit trans, non-binary and intersex players.

Newman said her Limitless contest, which allowed contestants to select from three mixed-gender strength categories, showed non-gendered contests could work for some sports.

“We’re at a crucial point now where this isn’t going to go away,” said Newman, who came last in the middle strength category in an interview at the gym after the competition.

“I’d like to think in the not-too-distant future there will be at least a lot more opportunities for people to be involved in sport.”