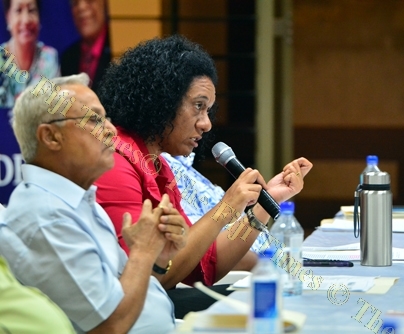 The National Federation Party (NFP) has come out strongly against the Speaker of Parliament, alleging he is protecting Government by stifling debate over issues of national interest.

In a statement, NFP general secretary Seni Nabou said this was clearly reflected in the rejection of their party motions and questions submitted to the Secretariat and Tables Office.

Ms Nabou said the party would write to the Inter Parliamentary Union (IPU), of which Fiji is a member, to alert the IPU of these breaches.

“So, basically, what this means is that when Government opposes anything brought for debate by the Opposition, the matter is not put on the floor of Parliament for debate.”

Ms Nabou revealed two of NFP’s motions were scuttled by the Secretariat and Tables Office upon the decision of the Speaker during vetting.

“They were on the establishment of special standing committees to firstly inquire into mismanagement, wastage and pilferage of taxpayers’ funds, as highlighted by Reports of the Auditor-General until 2019, and secondly, inquire into the operations and management of municipal councils as well as effectiveness of service delivery to ratepayers.

“Then there are two examples of questions that were, in our considered opinion, erroneously ruled out of order.

“Both were rejected, with the Speaker ruling that these breached Standing Orders.

“If this is not doing bidding for the FijiFirst Government, then what is?”

Questions sent to the Fijian Parliament yesterday remained unanswered when this edition went to press.