Spanish right-wing parties could hold a majority in parliament: poll 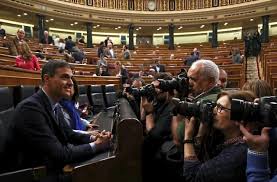 MADRID (Reuters) – Spanish right-wing parties PP, Ciudadanos and Vox could together hold a parliamentary majority in a snap election on April 28, one opinion poll showed on Saturday.

It was the first such outcome in a major poll since Socialist Prime Minister Pedro Sanchez called the early election a week ago after Catalan independence parties joined opposition parties in defeating his 2019 budget bill.

The three right-wing parties will win 169-179 seats in the election in the 350-seat legislature, according to a Sigma Dos poll published by newspaper El Mundo.

Sanchez’s Socialist Party will win the biggest share of seats, 110-114, according to the poll, short of a majority.

The conservative People’s Party will get 71-75 seats, while the center-right Ciudadanos will take 54-58. The far-right party Vox will win 44-46 seats, according to the poll.

The anti-immigration Vox is a newcomer on the Spanish political scene and pollsters had understimated its score in a regional election in Andalusia in December, where it won 12 seats out of 109.

Memories of the dictatorship of Francisco Franco, who died in 1975, meant Spain had long resisted the growing popularity of far-right party in much of Europe.

Opinion polls have over recent weeks have differed over which parties would have enough seats to form a coalition.

All polls see Sanchez’s Socialists leading and getting more seats than in the previous vote in 2016. But even a potential coalition between Socialists and Ciudadanos, which has so far said it does not want that at a national level, would leave both parties with up to 172 seats, short of a majority.