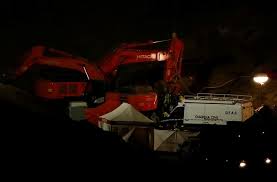 Rescue team members are seen at the area where Julen, a Spanish two-year-old boy, fell into a deep well twelve days ago when the family was taking a stroll through a private estate, in Totalan, southern Spain January 25, 2019. REUTERS/Marcelo del Pozo

TOTALAN, Spain (Reuters) – Spanish rescuers on Saturday found the dead body of a two-year-old boy who had fallen into a deep narrow well in southern Spain on Jan. 13, a Spanish official said.

Miners had been drilling day and night to reach the boy into the borehole – 100 meters (300 feet) deep and just 25 cm (10 inches) wide – which was blocked with soil.