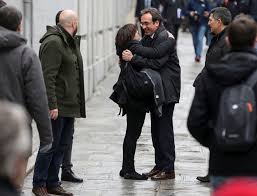 Catalan politician Josep Rull says goodbye to his wife Meritxell Lluis while returning to the Supreme Court during a break in proceedings as part of an investigation into Catalonia's banned bid for independence in Madrid, Spain, March 23, 2018. REUTERS/Susana Vera

MADRID/BARCELONA (Reuters) – Spain’s Supreme Court has ruled that five Catalan separatist leaders can leave prison to be sworn in as lawmakers next Tuesday but said it would not halt the trial over their role in Catalonia’s independence bid in 2017. Oriol Junqueras, Josep Rull, Jordi Turull and Jordi Sanchez all won seats in the […]