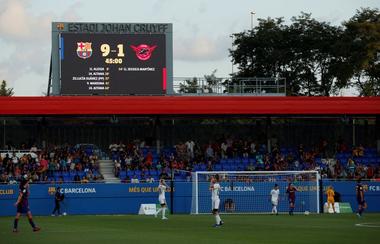 MADRID (Reuters) – Spain’s top-flight women footballers have signed their first collective agreement on pay and conditions, breaking an impasse with sporting authorities which led to a strike last November.

The agreement, which was signed on Tuesday but only made public on Wednesday, guarantees Primera Division players a minimum salary of 16,000 euros ($17,264.00) per year as well as paid holiday and maternity leave among other benefits.

“This is a historic day because this collective agreement is very important for players who were worried about their futures,” said sports minister Irene Lozano.

“It’s also important for all Spanish women because when one group of people makes advances then so does everyone else.”

Ruben Alcaine, president of the Association of Women’s Football Clubs (ACFF), added: “This is a moment to celebrate and now all actors in women’s football need to work together.

“We needed a sustainable model for women’s football in order to arm the sport with better resources.”