Spain says will not hand over opposition politician to Venezuelan authorities 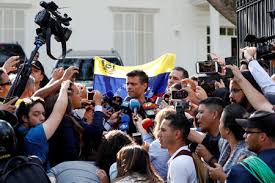 Venezuelan opposition leader Leopoldo Lopez talks to the media at the residence of the Spanish ambassador in Caracas, Venezuela May 2, 2019. REUTERS/Carlos Garcia Rawlins

The Spanish government said Lopez, his wife and his daughter had entered the Spanish ambassador’s residence in Caracas of their own accord and it hoped the Venezuelan authorities would respect the inviolability of that residence.