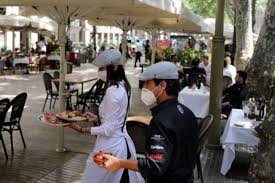 Waiters wearing protective face masks carry food for clients at an outdoor seating section of a restaurant at Ramblas, as some Spanish provinces are allowed to ease lockdown restrictions during phase one, amid the coronavirus disease (COVID-19) outbreak, in Barcelona, Spain, May 25, 2020. REUTERS/Nacho Doce?

MADRID (Reuters) – Spain’s health ministry revised the country’s coronavirus death toll down by nearly 2,000 to 26,834 on Monday after checking data provided by regions.

The total number of cases recorded since the outbreak began has also been revised down, and is now 235,400 — 372 fewer than on Sunday, it said.

Just 50 people died of the virus over the past week, it added, a marked fall from previous weeks.

The total number of deaths, has now been rising by less than 100 a day for over a week, compared with a peak of 950 in early April. The daily numbers often include people who had died days or even weeks earlier, the ministry said.

Health emergency coordinator Fernando Simon said checks of the data had shown that some deaths had previously been counted twice and that some people who were initially thought to be infected had turned out not to have the coronavirus.

“These are very real data that show a very favourable evolution,” he added.

Spain, the world’s second-most visited nation, is now urging foreign holidaymakers to start returning in July as it gradually eases one of Europe’s strictest lockdowns.