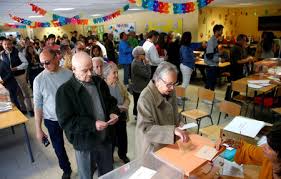 MADRID (Reuters) – Early voting data in Spanish elections on Sunday pointed to a hung parliament, though with the left-wing parties carving out a lead over a right wing bloc split by the emergence of nationalists Vox.

The Socialists of outgoing Prime Minister Pedro Sanchez took the lead but their share of the vote was far from a parliamentary majority, raising the likelihood of months of talks in a bitterly divided parliament to form a government.

Spaniards cast their votes in numbers close to record highs in the country’s most highly-contested election for decades, set to hand the far-right a sizeable presence in parliament for the first time since the end of Francisco Franco’s dictatorship in the 1970s.

“Vox is without a doubt one of the big winners of the night,” Narciso Michavila, the head of GAD3 pollsters, said on national television.

In an election dominated by cultural values and national identity rather than the economy, Vox’s campaign was marked by passionate reference to Spain’s history, customs and survival as a nation.

With around 40 percent of votes counted, data showed the two left wing parties in a clear lead over the three right-wing ones. The early vote count comes mostly from smaller towns and does not necessarily reflect the final outcome.

Early results showed the far-right party gaining 23 seats, up from less than one percent in the previous general election. Hundreds of people gathered outside its headquarters in Madrid as the vote was counted waving Spanish flags and cheering.

“They said it was impossible for us to get here, and we’ve done it,” said top Vox official Rocio Monasterio speaking on television from the party’s headquarters.

This is the third national election in four years, after the first two eroded the decades-long dominance of the two biggest parties, the Socialists and the conservative Popular Party.

The difficulty of assembling a governing coalition in such a fractured political landscape means that it is possible that Spain could head into yet another repeat election.

A splintered vote followed by protracted talks to form an administration is becoming a recurrent theme in European politics as voters reject traditional parties in favor of new groups often at the extremes of the political spectrum.

In Spain, issues like mass immigration or euroscepticism that have dominated political discourse elsewhere have been eclipsed by the question of national unity and the threat posed by the independence movement in the northeast region of Catalonia.

Many older voters well remember the military dictatorship of Franco, who died in 1975, and Spain had long been seen as resistant to the wave of populist nationalism spreading across much of Europe.

“Vox scares me,” said Aurelia Moreno, a 70-year-old pensioner after voting for the Socialists. “Vox’s rise is like going back in time.”