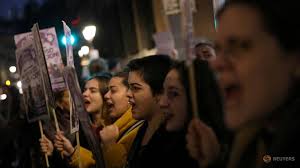 MADRID (Reuters) – Spanish prosecutors have tabled another sex crime charge against four men calling themselves “The Wolf Pack” who assaulted a young woman at the Pamplona bull-running festival in 2016.

In a controversial ruling, a Spanish court last year gave nine-year prison sentences to the men for sexually assaulting the 18-year-old in a doorway, but cleared them of rape because of a lack of physical violence.

The case gained notoriety amid the global #MeToo movement and brought calls for changes to Spain’s rape law.

In the new case, the Andalusia regional prosecutor’s office said it was seeking a seven-year prison sentence for sexual assault and other crimes suspected to have been committed in Pozoblanco, in southern Spain, two months earlier.

Evidence for that was found against four of the five men in total being investigated over the case at the San Fermin festival in the northern city of Pamplona.

Investigators found a video on the cellphone of one of the accused, in which a woman appeared unconscious while men were abusing her inside a car after a night of partying.

The woman was notified about the video and the new case opened, the prosecutor’s office said.

Despite the original ruling against them, the men were released on bail in June last year on a legal technicality that says no one can be held for more than two years without a definitive sentence.

A rape charge in Spain requires a plaintiff to present evidence of specific violence such as being threatened with a knife or dealt physical blows. The government has said it plans to change the penal code to make rape convictions easier.

The annual bull-running festival in the Navarran capital Pamplona is famed for its drunken revelry. But concern has grown over increased reports of sex attacks and harassment at the event as well mistreatment of women in general in Spain.