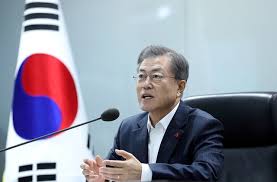 Moon also told a news conference the South Korean government would cooperate with the United States and the global community in resolving the issue of sanctions on North Korea in order to reopen the Kaesong industrial zone, shared by the two Koreas, and Mount Kumgang tours.