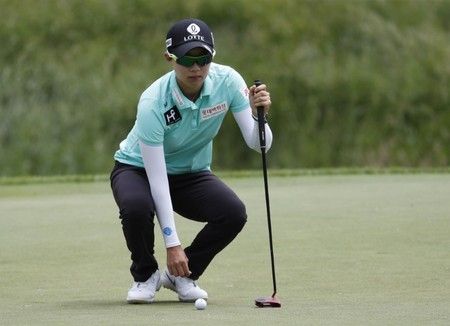 Kim, who won her lone major at the 2014 Evian Championship, mixed four birdies with a bogey for a three-under-par 69 at Hazeltine National Golf Club to sit one shot clear of Thailand’s Ariya Jutanugarn and American Annie Park.

Twice major winner Lydia Ko of New Zealand was among a pack of four golfers who went out early and were a further shot off the pace at the third major of the LPGA season.

Lexi Thompson, who arrived at Hazeltine in fine form after three consecutive top-two finishes, including a one-stroke victory at the ShopRite LPGA Classic, offset two birdies with a pair of bogeys for a 72.

That left Thompson three shots off the early pace and in a large group including South Korean Inbee Park, who won the tournament three consecutive years from 2013-15.

World number one Ko Jin-young of South Korea and defending champion Park Sung-hyun were among the late starters.

Canadian Brooke Henderson, fresh off her ninth LPGA Tour victory at the Meijer LPGA Classic on Sunday, was unable to build off the momentum as she struggled to a four-over-par 76.

Michelle Wie, back in action after a two-month layoff while dealing with a lingering wrist injury, endured a dismal return to competition with a 12-over-par 84 that included a quadruple-bogey, two double-bogeys, six bogeys and two birdies.

The former U.S. Women’s Open champion, who has endured a start-stop return to competitive golf after hand surgery last October, hit just six of 14 fairways and 10 of 18 greens in regulation while needing 35 putts to complete her round.