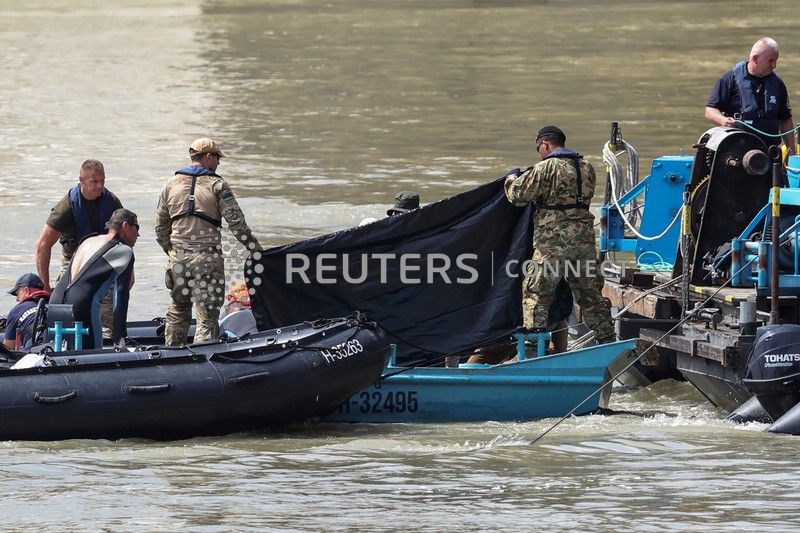 Rescue team continues its search after a tourist boat accident in the Danube river in Budapest, Hungary, June 4, 2019. REUTERS/Marko Djurica

BUDAPEST (Reuters) – The South Korean government expects to begin returning to Seoul the remains of some of the victims who died when a tourist boat sank last week in Budapest, an official said on Tuesday, as conditions for exploring the wreckage improved.

Twenty-eight people are presumed to have died when The Mermaid, a pleasure boat carrying 33 South Korean tourists and two Hungarian crew, capsized and sank after being hit by a cruise liner in Budapest last Wednesday. Seven Koreans survived and another 19 people are listed as missing.

Divers brought up a body from the wreck on Monday, and another body was pulled from the river 100 kilometres (60 miles) downstream.

The search has extended hundreds of kilometres south, into Serbia, as bodies have floated downstream. South Korea has asked Hungary to reinforce the search around Harta, where the body was found on Monday, Korean Embassy Defence Attache Song Shun-keun said.

“The operational environment continues to improve,” Song told a news briefing. “But we are still struggling to get into the ship due to bad visibility.”

Korean Deputy Foreign Minister for consular affairs Lee Sang-jin, who is in Budapest to lead the emergency response team, said he expected soon to be able to start returning to South Korea the bodies already identified. If they’re willing, survivors may speak to Hungarian investigators later on Tuesday, Lee added.

South Korean and Hungarian rescue and recovery teams have set up bases on the river and on the nearby Margaret Island, within sight of the crash site. They might mobilize drones if visibility improves, the attache said.

Song expects salvaging the vessel to begin Thursday, after a crane is delivered. Work may begin on Friday or Saturday, he added.

South Korea has asked Hungary to ensure that the captain of the cruiser, a 64-year-old Ukrainian under arrest pending bail, is not released. His lawyers said the captain was devastated by the accident but had done nothing wrong.

Local news reports that additional bodies have been found were untrue, Song said. Hungarian divers are under the water and South Koreans are supporting them, and there is no news yet of additional recovery of bodies.

A spokesman for Hungary’s Counter-Terror Centre TEK, which is coordinating the Hungarian side of the search, confirmed that no more bodies had been found so far.

Water situation: Nadi residents advised to store up on water