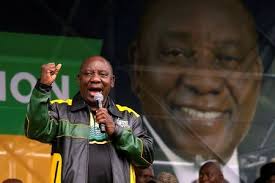 JOHANNESBURG (Reuters) – Even with a decisive election victory for South Africa’s ruling party this week, the country’s President Cyril Ramaphosa could still struggle to push through the tough reforms needed to galvanize Africa’s most developed economy, say analysts and some party insiders.

The former union leader turned business tycoon has promised to introduce major economic reforms and extend a crackdown on corruption if his African National Congress (ANC) party is returned to power in Wednesday’s national election. Ramaphosa’s allies say a result close to 60 percent in this week’s parliamentary vote, which some opinion polls suggest could be possible, would strengthen his hand to deliver on those pledges.

But some analysts and ANC party insiders are skeptical that Ramaphosa would make much progress with reforms, even with a clear election victory. They cite his tenuous grip over the party’s decision-making bodies, where former comrades in the struggle against the brutal apartheid regime are at each other’s throats in a high-stakes battle for power and wealth.

“Ramaphosa needs a united ANC to achieve his agenda, but he doesn’t have that,” said a veteran ANC politician who did not wish to be identified discussing internal rivalries. “His enemies are going nowhere.”

Ralph Mathekga, a political analyst and author of a book on Ramaphosa, echoed the view. “There’s a herd mentality that if Ramaphosa gets a strong majority for the ANC, it will somehow strengthen him. That’s not the case,” he said.

Ramaphosa disputes that his hands will be tied if he is returned to power. At a campaign event last week in Johannesburg he said there would be a “step-change” in the pace of reform and that the economy was ready for lift off. “Our government is now going to open up the valves of our economy and give our people an opportunity,” he said.

Ramaphosa became leader of the ANC in December 2017 after narrowly defeating a faction allied with his scandal-plagued predecessor Jacob Zuma. This will be Ramaphosa’s first national election since taking over as head of state in February 2018, after roughly four years as Zuma’s deputy.

The president is under pressure to address gaping racial disparities in income and wealth that persist 25 years after the end of white minority rule. He also wants to reverse a slide in support for the ANC, which has governed South Africa since 1994 but in recent years has lost support in major cities like the financial and political capitals of Johannesburg and Pretoria.

In the 15 months since he took office, Ramaphosa has been forced into uneasy compromises in key policy areas like land reform and fixing struggling state power firm Eskom, opposition politicians say.

Ramaphosa has vowed to accelerate the redistribution of land to the black majority, endorsing an opposition bill to amend the constitution to make expropriation without compensation easier.

But he also has offered assurances that investments and food security would not be threatened. In doing so, he satisfied neither radical left-wing nor business-friendly factions within his governing alliance and the opposition.

On Eskom, the president has promised trade unions that there will be no layoffs as part of a turnaround plan, even though company management and energy experts say the utility’s bloated workforce is one of its biggest problems.

Getting land reform right and repairing Eskom will be critical to restoring investor confidence in an economy where growth has slowed to a trickle due to a toxic mix of corruption scandals and regulatory upheaval during Zuma’s tenure.

“If you see progress in the clean-up of state-owned enterprises like Eskom that would mean that big headache that investors have would fade away,” said Tilmann Kolb, analyst at the financial services firm UBS Global Wealth Management.

A key challenge for the president is the opposition he faces within his own party, sources in the ANC say. A close Zuma ally, Ace Magashule, is in charge of the day-to-day running of the party. And, while some senior party figures previously aligned with Zuma have shifted their support to Ramaphosa, he still has to spend time managing opponents within the ANC, sources say.

The ANC’s list of parliamentary candidates contains many hardliners who are opposed to Ramaphosa’s reformist agenda and could frustrate his initiatives in parliament.

Ramaphosa has to choose all but two members of his next cabinet from his party’s parliamentary caucus. While analysts expect him to appoint close confidants to key posts like finance minister and foreign minister, he may have to hand lesser posts to opponents he wishes to bring onside.

“Within the ANC you adopt an inclusive approach. You are obviously sensitive to the fact that you could be accused of just appointing your own supporters,” said one ANC executive member aligned with Ramaphosa.

A challenge to Ramaphosa’s leadership could emerge at the next party conference in 2022 — or even before if his enemies can muster enough support.

Ramaphosa convinced the party leadership to instruct Zuma to resign last year, and Zuma did the same to his predecessor, Thabo Mbeki.

Ramaphosa’s ability to bring about change during his time in office has been limited, according to analysts and opposition politicians.

Ramaphosa has pledged to bail out Eskom and restructure it. He has established judicial inquiries that have exposed corruption during Zuma’s time in office. Zuma denies he was at fault.

But the president has not generated the economic growth that some experts predicted and he targeted when campaigning for ANC leader.

Investors want to see efforts to overhaul rigid labor laws and cut red tape. But analysts say that could be difficult, as Ramaphosa needs to appease the trade union federation COSATU, a close ANC ally that favors a strong role for the state in the economy.

Ramaphosa could also face pressure to appease more radical elements in his party who would like to see the ANC pursue wealth redistribution aggressively, particularly following a rise in support for the Economic Freedom Fighters (EFF), a far-left opposition party. The EFF backs populist policies like nationalizing mines — policies which have spooked investors.

Ramaphosa’s allies scoff at the idea that the EFF could force Ramaphosa’s hand on policy. They say the president is playing a long game and that the corruption inquiries he has set up will take out his enemies in the ANC.