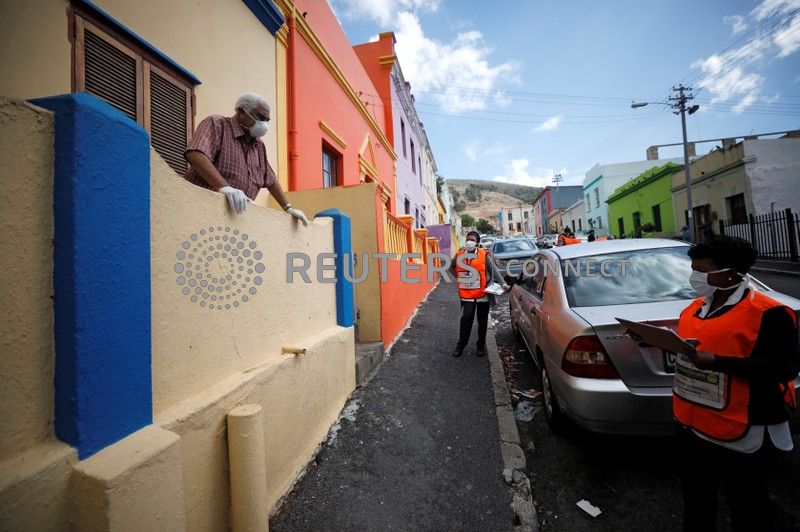 JOHANNESBURG (Reuters) – South Africa’s main health workers’ union planned to challenge the government in court on Tuesday over shortages of protective gear for frontline staff as the country braced for a surge in new coronavirus cases.

Under a strict 21-day lockdown imposed from March 27 in a bid to contain the outbreak, South Africa has 1,749 confirmed cases, the continent’s highest number, and 13 deaths.

“The risk of employees being infected with the COVID-19 virus is real,” Zola Saphetha, general secretary of the National Education, Health and Allied Workers’ Union (NEHAWU), said in court papers. COVID-19 is the potentially lethal respiratory illness caused by the novel coronavirus.

A health ministry spokesman did not respond to a request for comment, but Health Minister Zweli Mkhize said on Tuesday that the country as a whole had not run out of protective equipment.

He encouraged health workers to point out where there were shortages so the government could move stocks around and said no one would be forced to work if they didn’t feel adequately protected.

Many doctors are buying their own protective gear in a desperate bid to ward off infection. Officials in the worst-hit Gauteng province appealed over the weekend for public donations of ventilators and vital masks and gloves.

The union wants the ministers of health and labour, among others, to establish rules on treatment in the absence of appropriate protective equipment.

“The failure to provide guidelines to mitigate the risk to employees in the circumstances unjustifiably and without valid reason places employees at great risk and violates their right to work in a safe environment,” the affidavit said.

The union expressed outrage last week that several of its members had contracted the coronavirus at a hospital in KwaZulu-Natal province. Mkhize said on Tuesday that around 48 staff members at the hospital had now tested positive and that provincial officials were discussing closing down parts of the facility.

Unions exert great power in South Africa. NEHAWU’s quarter of a million members are part of a group of unions that are in a alliance with President Cyril Ramaphosa’s ruling African National Congress (ANC) party.

“We don’t have an unlimited reserve of doctors and nurses, and we know the case numbers are going to rise,” Angelique Coetzee, chairwoman of the South African Medical Association, which represents some 16,000 doctors, told Reuters.

A global scarcity of personal protective equipment, such as masks and gloves, for nurses, doctors, porters and other health workers is a big obstacle to attempts to curb death tolls, elsewhere in Africa and on other continents.

In Zimbabwe, where health workers had been striking over pay and working conditions before COVID-19 arrived, doctors have also gone to court to force the government to provide equipment, Zimbabwe Lawyers for Human Rights said on Monday. The court has not yet set a date for a hearing.