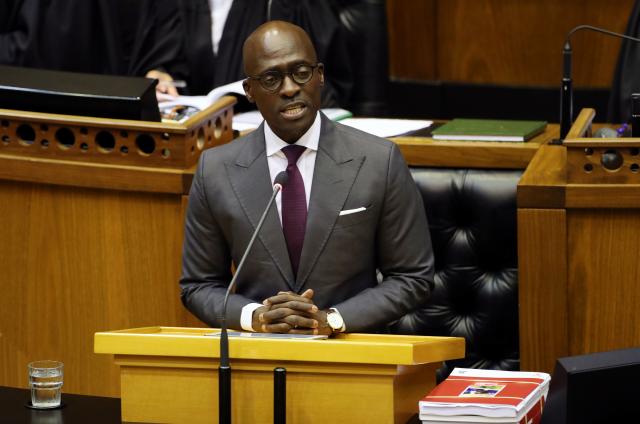 JOHANNESBURG (Reuters) – South African Home Affairs Minister Malusi Gigaba said on Sunday he had faced blackmail threats over a private sex video that was leaked after his phone was hacked when he was finance minister.

Gigaba, who was finance minister between March 2017 and February 2018, said he had decided to make the announcement because he had learned that the video was now circulating in political circles.

“My wife and I have learned, with regret and sadness, that a video containing material of a sexual nature, meant for our eyes only, which was stolen when my communication got illegally intercepted/my phone got hacked, in 2016/17, is circulating among certain political figures,” Gigaba said on Twitter.

“This video has been at the center of a number of blackmail and extortion attempts, dating back to the period immediately following my appointment as Minister of Finance, on 31 March 2017, all of which I have steadfastly refused to entertain,” he said on his official Twitter account.

Gigaba was thrust into the role of finance minister after then President Jacob Zuma sacked Pravin Gordhan, a move that unnerved investors and roiled markets at the time.

Gigaba’s spokesman Vuyo Mkhize said that anonymous parties initially demanded cash payments and when the minister rebuffed those demands, the parties asked him “if he could consider paying via the issuing of contracts.” He said the minister flatly refused.

He said the state companies that were mentioned in connection with the contracts were South African Airways (SAA), the Public Investment Corporation which manages the pensions of civil servants, and the Development Bank of Southern Africa.

Mkhize said Gigaba had taken the matter to the Inspector General because “he had been presented with evidence that his computer had been subjected to surveillance by state security agencies.”

Gigaba, who in February was reappointed home affairs minister, a position he held previously, said on Sunday that law enforcement and intelligence agencies were investigating the matter.

Police officials at the national commissioner’s office and the elite Hawks investigative unit could not immediately be reached for comment.