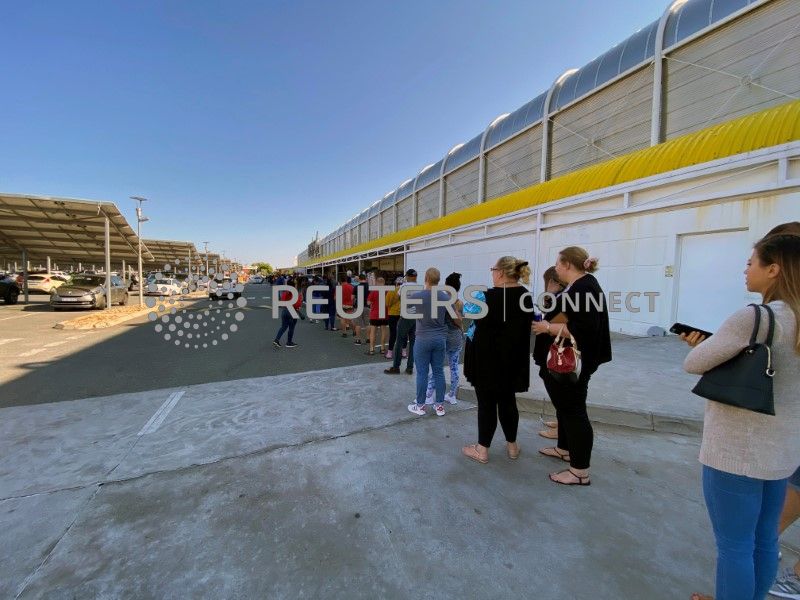 Shoppers queue to stock up on groceries at a Makro Store at Strubens Valley, ahead of a nationwide lockdown for 21 days to try to contain the coronavirus disease (COVID-19) outbreak, in Johannesburg, South Africa, March 24, 2020. REUTERS/Siyabonga Sishi

CAPE TOWN/JOHANNESBURG (Reuters) – South African officials identified quarantine sites across the country on Wednesday, as the number of confirmed coronavirus cases rose to 709 from 554 and the health minister warned infections were expected to keep rising.

South Africa has reported the most coronavirus cases in sub-Saharan Africa, and public health experts are worried that the virus could overwhelm the health system if infection rates rise steeply.

President Cyril Ramaphosa has been praised for ordering some of the toughest measures on the continent to try to halt the spread of the virus, including a 21-day lockdown from midnight on Thursday, deploying the army to support police and ordering underground mines to suspend operations.

De Lille’s spokeswoman and a Health Ministry spokesman were not able to say who would be placed in the quarantine sites.

Health Minister Zweli Mkhize said in an interview with state broadcaster SABC that it was still “early days” in terms of the number of infections.

“We are expecting that there is still going to be quite an increase in the number of cases, and we are also expecting that a lot of work needs to be done by South Africans to contain this infection,” Mkhize said.

Businesses of all sizes are bracing for a big impact from the lockdown, with Airlink becoming the latest local airline to suspend flights from midnight on Thursday and state power utility Eskom applying for its critical staff to be exempt so that electricity supplies can continue uninterrupted.

South African National Parks said it would close all its tourism facilities to the public from Wednesday.

Mining Minister Gwede Mantashe said production of gold, chrome, manganese and other minerals would be scaled down but that the processing of platinum group metals would continue.

Government bonds including the 2030 issue rallied on the SARB intervention.