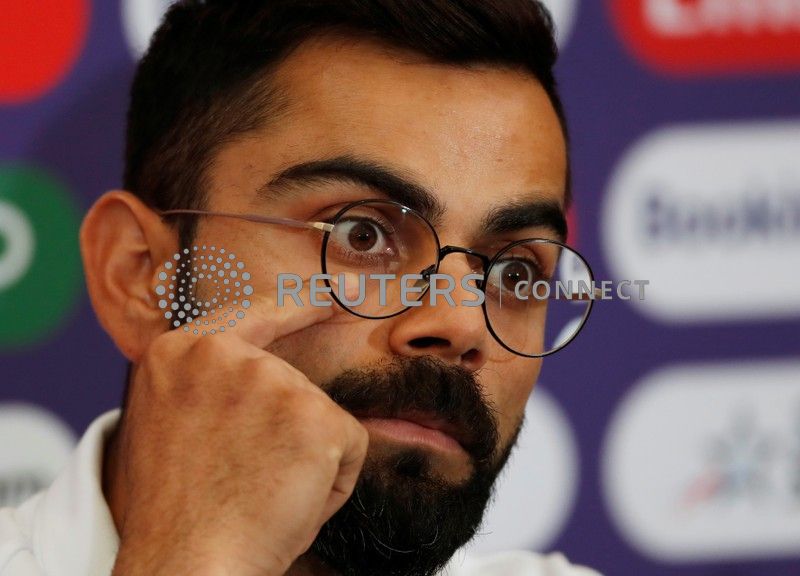 SOUTHAMPTON, England (Reuters) – India are banking on their experience in their World Cup opener against South Africa and cannot take the opposition’s depleted bowling attack lightly, captain Virat Kohli said on Tuesday, insisting the Proteas can call upon quality replacements.

Kohli’s India are ranked second in the world and will be firm favourites as they begin their quest for a third World Cup triumph against a South African side that faces an uphill struggle after the loss of strike bowlers Dale Steyn and Lungi Ngidi.

“We need to bring all our experience to the play tomorrow to be able to make right decisions in pressure situations,” Kohli told reporters during a training session ahead of Wednesday’s match in Southampton.

“So we never take anyone lightly, and whether a few key players get injured or not, if a youngster is stepping in and he has the right mindset, he can really perform on the day … we need to maintain respect for that and focus on our strength and what we can do as a side.”

Kohli, who is captaining the Indian side for the first time in a World Cup, said his team’s late start to the tournament allows them to learn from previous games and match conditions.

“From that point of view, we would say that we have a lot of positives that we can take out of starting after everyone else.”

India have won the World Cup in 1983 and 2011, while South Africa has never won the 50-over edition, but Kohli said this year’s tournament presents a different challenge.

Kohli said the unique format of the 2019 tournament, in which every nation plays nine matches over more than a month, means that teams must adapt very quickly and that experienced teams will have an edge.

“The errors you would make when you are not that aware of game situations, they will slowly start to taper off as you play more and more cricket.”

“When you have experienced people in your team who have also grown with you as cricketers, eventually you all start making good decisions, you have discussions, you think of the right thing, sometimes instinctively.”