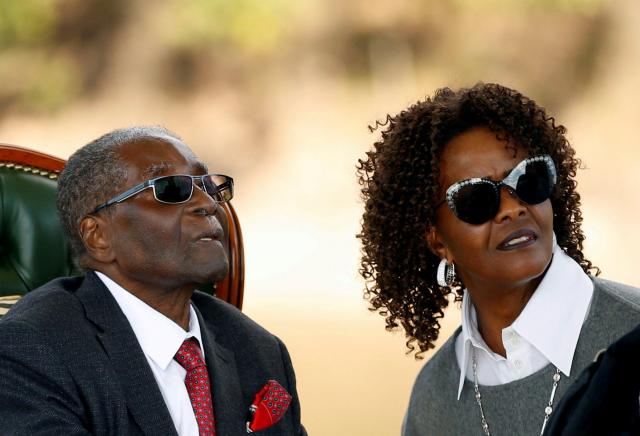 JOHANNESBURG (Reuters) – South Africa has issued an arrest warrant for Zimbabwe’s former first lady Grace Mugabe over the alleged assault of a model in a luxury Johannesburg hotel in 2017, police said on Wednesday.

After the alleged assault with an electric cable came to light, the South African government granted Grace Mugabe diplomatic immunity and she left the country. Her husband, Robert Mugabe, was Zimbabwe’s president at the time.

The immunity was overturned by a South African court in July this year after the alleged victim, model Gabriella Engels, challenged the decision.

“I can confirm that a warrant for the arrest of Grace Mugabe was issued last Thursday,” police spokesman Vishnu Naidoo said, adding that police were seeking Interpol’s help to enforce the warrant.

Zimbabwe has an extradition agreement with South Africa allowing the two nations to exchange persons accused of crimes in either jurisdiction.

But Zimababwe’s deputy minister for information, Energy Mutodi, told Reuters that Zimbabwe would not extradite her to South Africa as this would be “harassment”.

“I believe the government of Zimbabwe will not tolerate any harassment or degrading treatment on the former President Mugabe and his immediate family members,” Mutodi said, adding that he would still need to consult with President Emmerson Mnangagwa on the final decision.

Mrs Mugabe, 53, was seen as a potential successor to her 94-year-old husband Robert, who ruled Zimbabwe from 1980 until he was ousted in a coup in November last year. She was famed for her lavish lifestyle.

She has denied assaulting Engels, saying an “intoxicated and unhinged” Engels attacked her with a knife after the model had gone to see the Mugabes’ sons at the hotel in Johannesburg’s posh Sandton district.

Mrs Mugabe has retreated from the limelight in Zimbabwe since her husband was ousted.