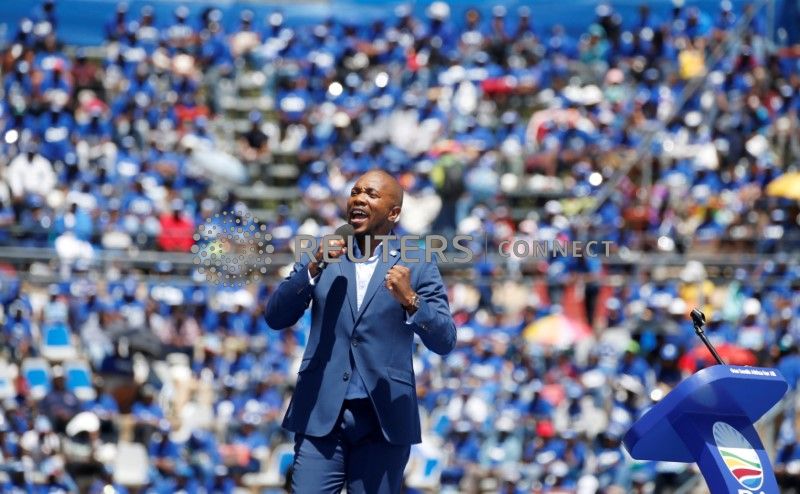 In the most hotly contested election since the end of apartheid in South Africa, President Cyril Ramaphosa is hoping to reverse a slide in support for the ANC, which has won every general election since Nelson Mandela swept to power in 1994.

Ramaphosa, who replaced scandal-plagued Jacob Zuma as ANC leader more than a year ago, has cast himself as a reformer but has been hampered by party infighting.

“If nothing changes radically now by the ballot box, … there will be more protests, and then who knows?” Mmusi Maimane, head of the Democratic Alliance (DA) party, told reporters when asked whether South Africa faced a violent future.

“50 percent of young people in this country can’t find work. They will act, give them the time,” Maimane added. The overall unemployment rate in Africa’s most advanced economy is around 27 percent.

Opinion polls predict the ANC will hold onto its majority in the May 8 election, but they differ over its margin of victory.

The DA, which has roots among white liberals in the apartheid era, elected Maimane as its first black leader in 2015 to widen its appeal and improved its national standing by winning control of several major cities in 2016.

But it has since become embroiled in internal disputes, and some analysts think Ramaphosa’s reformist credentials will help the ANC eat into the DA’s liberal support base.

Maimane said on Thursday that the DA had not done enough to capitalise on the failings of the ANC, whose reputation was tarnished by a series of corruption scandals under Zuma.

“Fighting corruption isn’t reforming … any government must do that,” Maimane said.

An ANC spokesman acknowledged receipt of questions from Reuters on Maimane’s comments but did not respond.

The DA opposes ANC policy proposals like changing the constitution to facilitate land expropriation without compensation. It supports selling off stakes in struggling state firms to bolster their finances, whereas conservative parts of the ANC are suspicious of any form of privatisation.

The DA leader said one goal on May 8 was to bring the ANC’s vote share below 50 percent, from 62 percent at the 2014 election.

“Then we will have a grand negotiation in South Africa about political reform,” Maimane said. The DA received 22 percent of the vote in 2014.